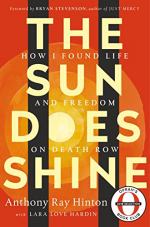 Anthony Ray Hinton
This Study Guide consists of approximately 57 pages of chapter summaries, quotes, character analysis, themes, and more - everything you need to sharpen your knowledge of The Sun Does Shine.

The Sun Does Shine Summary & Study Guide includes comprehensive information and analysis to help you understand the book. This study guide contains the following sections:

This detailed literature summary also contains Topics for Discussion on The Sun Does Shine by Anthony Ray Hinton.

The following version of the book was used to create this study guide: Hinton, Antony Ray with Lara Love Hardin. The Sun Does Shine: How I Found Life and Freedom on Death Row. St. Martin's Press, 2018. Oprah's Book Club Edition (Hardcover).

The Sun Does Shine opens with a forward by Bryan Stevenson. Stevenson is the founder of the Equal Justice Initiative and attorney to Anthony Ray Hinton. He outlines the details of Hinton’s wrongful conviction and death sentence. Hinton was charged and found guilty of two murders, despite a solid alibi and a lack of evidence against him. Stevenson characterizes Ray as “thoughtful, sincere, genuine, compassionate, [and] funny” and emphasizes the necessity of hearing his story in order to reform a highly flawed criminal justice system.

In Jefferson County Jail in 1986, Anthony Ray Hinton awaits his sentencing. Maintaining his innocence on the stand, he is sentenced to die in the electric chair. Although he is devastated, he knows he is guaranteed an appeal and still has the chance to prove his innocence and save his life.

The story flashes back to Hinton’s youth in rural Alabama where he grew up both poor and black. Faced with racism and the legacy of Jim Crow, as well as very limited opportunities for his future due to his economic status, Ray nevertheless follows his mother’s lessons. He treats everyone with kindness and compassion no matter how they treat him. One day in his twenties, and desperately in need of a vehicle in order to get a decent job but with no money to buy one, Ray uncharacteristically takes a car for a test drive and steals it off the lot. Consumed with guilt, he confesses and turns himself in two years later, determined never to break the law again.

Ray is still on parole when he is arrested and charged with robbing and murdering two restaurant managers in the middle of the night. Ray’s record allows him to be admitted into the system faster than usual but he trusts authority and the justice system and believes the mistake will be easily cleared up. Ray has a solid alibi: he was working in a secure facility at the time of the one of the crimes and both the security guard and his supervisor can account for his whereabouts during his whole shift. However, eyewitnesses identify him as the guilty party and the police tie a gun in his mother’s home to the murders, despite the fact that the gun was full of dust and obviously had not been fired in years.

Due to a combination of institutional racism, prosecutorial misconduct, ineffective legal representation, and no money to hire experts or a better lawyer to put up an effective defense, Ray is convicted and sent to death row at Holman Prison. For his first few years there, Ray becomes a different person. With a dark cloud over him he abandons his faith, speaks to no one, and suffers the miserable and tortuous prison conditions. His mother and his best friend Lester visit at every opportunity and he puts on a good face for them. Hinton’s lawyer works on his appeals to the State courts but he is no more effective than he was at the original trial and Hinton has no money to incentivize him or to hire new ballistics experts to prove that his mother’s gun is not connected to the crimes. His only option after the State appeals fail is to appeal to the US Supreme Court, but there is no money provided in that case for a public defender and his lawyer will not work for him pro bono. Ray fears getting an execution date and is tormented by the executions taking place just down the hall from his cell. He and his fellow inmates begin banging on the bars of their cells during each execution so their fellow inmate knows he is not alone in his final moments.

One day, a new lawyer arrives to represent Ray, to his surprise. She has been sent by Bryan Stevenson at the Equal Justice Initiative to represent him free of charge. She begins a new but long legal process, once again at the State level, and Ray is relieved to know he cannot be executed while his case is still being appealed. One night, Ray hears someone sobbing in a nearby cell. Though this is common, this man sounds more upset than usual. Thinking about his mother and Lester, Ray realizes that although so many of his life choices have been taken away from him, he still has some choices he can make. He can choose to reach out and try to help this suffering person, and he does. Ray’s black cloud lifts and he expresses comfort and compassion for his fellow inmate, and the others in their cells around him follow his lead. Ray rediscovers his faith, realizes that everyone deserves compassion, and resolves to find another way to live on death row, knowing that everything is a choice.

As his lawyer works on his case, Ray uses his imagination to escape his circumstances and befriends his fellow inmates, building a community around him. He is shocked to learn that one of his friends on the row, Henry, is a former KKK member, convicted for lynching an innocent black boy. Ray talks to Henry about this and learns that Henry is full of regret and shame for having believed and followed his parents’ racist teachings. Ray understands, as he too was influenced by his mother’s lessons, and considers himself lucky to have a parent who taught him to love instead of to hate. Ray sees that Henry has reformed and is deeply contrite and treats him with forgiveness and compassion. Determined to improve the situation on death row even further, Ray convinces the warden to let them have books in their cells and start a small book club, arguing that the distraction will keep the men more peaceful. The book club discussions and the shared reading allow the men to escape and to explore some of life’s big themes such as hope, redemption, and race issues.

Meanwhile, Ray’s lawyer gets a new job and has to leave his case, but the Equal Justice Initiative sends him another who continues to work on his case. Many years have now passed and many of Ray’s friends have been executed, including Henry, who was killed in 1997. Ray’s new lawyer says that he can get Ray’s sentence changed to life in prison without parole, but Ray refuses and fires him, determined to prove his innocence.

Ray appeals directly to the founder of the Equal Justice Initiative, Bryan Stevenson, who agrees to take on his case personally. Bryan hires some of the best ballistics experts in the country to refute the State’s gun evidence and they find irrefutable proof that the only physical evidence against Ray is false. However, the State is unwilling to admit it made a mistake and the process of getting this evidence admitted is long and tortuous. Ray’s case is bounced around through various State courts for years as Ray goes though periods of hope and periods of feeling like the State will do anything to avoid admitting fault. The fact that proof of innocence seems to matter so little to the people in positions of power is crushing.

The legal process drags on for years. Ray’s mother dies in 2002. In 2006, the Alabama Court of Criminal Appeals denies his appeal again and, in 2013, so does the Alabama Supreme Court. Ray now decides to take his case to the US Supreme Court, which is in many ways his last resort and, should he fail, it will be very hard for Bryan to prevent his execution. In 2014, in a unanimous decision, the US Supreme Court vacates Ray’s conviction and orders a new trial. After nearly thirty years, Ray leaves death row and returns to Jefferson County to await a new trial. Still waiting for a trial date, Ray suddenly gets wonderful news from Bryan: the State is dropping all charges against him and he is going home. In 2015, Ray is finally released.

Ray spends the first while with his friend Lester, before moving into his mother’s old house and fixing it up. Adjusting to life on the outside is hard emotionally, psychologically, and practically. Ray lives in fear of his happening to him again; he trusts no one and makes sure he had an alibi for every day of his life. He travels the country and the world telling his story and advocating for the end of the death penalty and espousing the virtues of compassion and forgiveness.

In the afterword, Ray lists the names of every man and woman on death row in America as of March 2017. He writes a call to action, asking readers to read their names and to ask themselves: do you know who is innocent? What is the price of a life?

More summaries and resources for teaching or studying The Sun Does Shine.

The Sun Does Shine from BookRags. (c)2022 BookRags, Inc. All rights reserved.