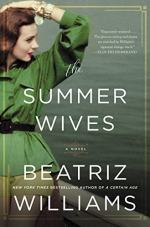 Related Topics
Our Woman in Moscow

Beatriz Williams
This Study Guide consists of approximately 61 pages of chapter summaries, quotes, character analysis, themes, and more - everything you need to sharpen your knowledge of The Summer Wives.

This detailed literature summary also contains Quotes and a Free Quiz on The Summer Wives by Beatriz Williams.

The following version of this book was used to create the guide: Williams, Beatriz. The Summer Wives. William Morrow, HarperCollins Publishers, 2018.

The novel began with Miranda’s foreword. After 18 years, she returned to Greyfriars on Winthrop Island in May 1969. She asked Mrs. Medeiros, about her grandson Joseph, who had recently escaped from prison.

Book 1, “June,” begins in June 1930. Bianca Medeiro is infatuated with Hugh Fisher, the son of a new summer family on the Island, despite her cousin Francisca’s affair with him the summer before. Since then, both Fisher and Francisca had been engaged to other people, and Bianca had matured. Fisher flirts with Bianca in her uncle’s general store.

Part 2 began in June 1951. The morning of Miranda’s mother’s wedding, she witnessed a young man save an older man from drowning and helped the injured man inside. Miranda invited the young man, Joseph, for coffee. Later that day after the newlyweds left for their honeymoon, Isobel and Miranda drank together before rowing to the lighthouse on Fleet Rock to see Joseph. While Isobel rested, Miranda realized she had fallen in love with Joseph. The next morning, Isobel took Miranda to her Episcopal church before going to Clay’s home.

In private, Clay asked Miranda to watch Isobel to prevent her from pursuing a relationship with Joseph. Isobel’s mother, Abigail’s, arrival prompted Isobel to ask Miranda to deliver notes to Joseph. Part 3 began in June 1969. Miranda’s half-brother, Hugh Fisher, Jr., surprised her one morning at the pool. After dressing, Miranda returned there to a bouquet of roses. Hugh insisted that Miranda accompany him to the Winthrop Island Club for dinner, and to Isobel and her mother’s dismay, she went. On the way, Hugh asked Miranda if Joseph had really killed Fisher.

She was met at the Club with hostility and awkwardness. Clay vouched for her. He explained that Miranda’s statements to newspapers about the murder caused the Families’ hostility toward her. Hugh later took Miranda to Horseshoe Beach. He shared his dreams, and Miranda shared that she had recently miscarried. One night, Miranda’s husband attempted to rape her. In the car, he drove into a tree, killing their unborn baby.

Book 2, “July,” begins in July 1930. Bianca sneaks to Greyfriars to console Fisher after his father’s death. He drunkenly kisses her for the first time. She loses her virginity to him. Afterward, they promise their love to one another.

Part 2 began in July 1951. Miranda felt her presence at the Festival of the Holy Spirit was an “intrusion” on a Portuguese cultural event (153). She reposed in the Church, where Mrs. Vargas was waiting for her son, Joseph. He sailed Miranda to Greyfriars, shared his dreams, and urged that Isobel should not marry Clay. That night, Isobel, Miranda, and the Countess attended a Club party where Isobel publicly broke her engagement with Clay. Clay drunkenly kissed and groped Miranda afterward. He later found Isobel and Miranda on their walk home and drove them to Greyfriars.

Part 3 began in July 1969. Miranda had been receiving more roses. During the moon landing gathering at Greyfriars, U.S. Marshals arrived (207). On Miranda’s walk, she found Clay’s wife having sex with Hugh. Miranda drove Clay home to his guesthouse, where they almost had sex. Miranda then drove alone to Horseshoe Beach, wading into the water without regard to her safety. Someone pulled her onto shore, and she awoke the next morning in her bed with a new bouquet of roses.

Book 3, “August,” begins in August 1930. Bianca has been consistently sneaking out to see Fisher. He tells her that he is marrying Abigail next week, and Bianca feels used and betrayed. Her cousin Laura tells her that Francisca aborted Fisher’s baby in secret that she conceived with Fisher and was lucky to find a man to marry her. The next day, Bianca finds Pascoal Vargas on the docks and tricks him into thinking he seduces her. This continues for almost a week, and Vargas confesses when Francisca returns home.

Part 2 began in August 1951. Miranda walked to the harbor before sunrise to deliver Isobel’s note to Joseph. Joseph insisted she accompany them on the boat. During a swim, hidden by the boat, Joseph kissed her. Vargas insisted Miranda leave them. Joseph caught up to her and assured that he and Isobel were never romantic. Joseph and Miranda confessed their love for each other. They went back to Greyfriars to find that Fisher and Miranda’s mother had returned early with news of their pregnancy. Joseph met Miranda there that night and rowed them to Fleet Rock. He confessed that Isobel was his half-sister from Fisher. They went inside his house, and Mrs. Vargas overheard Miranda say her mother was pregnant. Miranda was later shaken awake by Mrs. Vargas with news of an accident.

Part 3 began in August 1969. Carroll found Miranda at Greyfriars, and Hugh protected her. Mrs. Medeiro brought lobsters to Greyfriars—one had a cloth note. U.S. Marshals approached Miranda at Tom Donnelly’s party. She met Joseph there, who brought her to the lighthouse where they consummated their relationship. He asked her to watch his dying mother while he fetched the doctor. Mrs. Vargas confessed to Miranda, thinking she was a priest, that she killed Fisher with a knife in 1951. Isobel brought the priest and news of Joseph’s capture. They boated back to Horseshoe Beach, and after Joseph was put on a ship, he escaped into the ocean. He hid in the Fisher boathouse, then the dinghy, which Miranda and Isobel brought to the lighthouse to fetch Mrs. Vargas’s corpse. Joseph took Hugh’s sailboat like Miranda asked.

“Afterword: 1930” explains the deal Fisher made with pregnant and married Bianca: she could kill him if he took another woman before her. “Afterword: 1970” reveals that Miranda and Clay helped Joseph receive a presidential pardon. Joseph returns to Miranda on Hugh’s sailboat, pregnant with his child, at the end of the novel.

More summaries and resources for teaching or studying The Summer Wives.