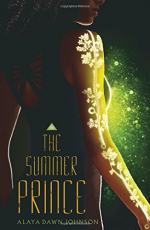 Alaya Dawn Johnson
This Study Guide consists of approximately 35 pages of chapter summaries, quotes, character analysis, themes, and more - everything you need to sharpen your knowledge of The Summer Prince.

This detailed literature summary also contains Quotes and a Free Quiz on The Summer Prince by Alaya Dawn Johnson.

NOTE: Due to the structure of the novel, this study guide refers to sections and quote by page numbers, using the Scholastic Paperbacks/Arthur A. Levine August 2014 First edition.

“The Summer Prince” is a young adult dystopian novel by Alaya Dawn Johnson which follows the efforts of 17-year-old June Costa to not only become a successful artist, but to win the love and save the life of recently-elected Summer King Enki in the City of Palmares Tres, Brazil. Hundreds of years after a nuclear war devastated the Earth, much of mankind survives in cities. Some cities, like Palmares Tres, are totally contained by glass and steel. Palmares Tres is ruled primarily by a Queen and a Parliament composed mainly of women called “Aunties”. (The rare man who serves in office is referred to as an “Uncle”.)

Palmares Tres has adopted the custom of electing and sacrificing a king every five years. This is done because the horrors of the past are blamed on men, because mainly women rule Palmares Tres and serve in politics, and because the first king and queen instituted the policy to ensure both the democratic process through the election of the one-year summer king, and the sanctification of the gods through the king selecting the Queen to rule for the next four years as he dies. June considers the practice barbaric.

June and her best friend, Gil, are always seeking new ways to expose the public to June’s artwork. June’s mother, Valencia, doesn’t think June has a future in art, while Valencia’s wife, Auntie Yaha (a high-level politician) does her best to encourage June. June hates her mother for cheating on her father with Yaha while he was on his deathbed. Because of Auntie Yaha’s connections, June and Gil are able to attend elite events and parties, including the reception for new King Enki. June recognizes a fellow artist in Enki, and hopes to catch his eye. But it is Gil who catches Enki’s eye, making June jealous and sad. June creates a stunning mural of Enki and Gil kissing after the reception which ultimately catches Enki’s eye. Enki and June agree to collaborate with one another on art while June falls more and more in love with Enki.

As the year passes, Enki begins to return June’s feelings. Gil, who is also in love with Enki by this point, begs June to find a way to save Enki’s life. Enki, however, has no concerns about dying. He simply hopes to bring attention to the plight of the lowest class of citizens in Palmares before he is killed. Enki has also had his body modified with nanotechnology, so that he can tap into the technical consciousness of the city. He predicts the collapse of a massive maintenance spider bot, which saves the lives of thousands and ignites a political war over technology. The technophiles believe Palmares must open up to the world and get on the cutting edge of technology. The isolationists oppose radical changes. June herself believes the city needs to update itself, but doesn’t need to go to the extreme the way the technophiles advocate. Queen Oreste herself favors humanity over technology. Enki sides with the technophiles. The violence is temporarily abated when the leaders of the technophiles are arrested following the deaths of innocent bystanders during a massive protest, and the issue is set to be debated in Parliament. Meanwhile, June learns that Queen Oreste and her inner circle staged the deaths of the bystanders in order to put down the rebellion. June is horrified.

June convinces Enki to run away with her. They flee Palmares Tres for Salvadore, Enki’s homeland, where a local betrays them to Queen Oreste. Enki explains that whether or not he ran away, he would still die because he has been implanted with nanobots designed to kill him at the appropriate time. He explains he ran away with June just to make her happy. While awaiting the arrival of Queen Oreste, Enki recovers a digital copy of Salvadore’s entire library (now destroyed), which is later given to June. As Enki dies, he selects June to be Queen for the next four years. June doesn’t want to be Queen, but knows she has no other choice. Examining the library files, June discovers an audio account from the very first Queen, Odette, who reveals she never wanted the sacrifices to last more than two cycles of kings. June decides to make this information public, and waits to see what will happen.

More summaries and resources for teaching or studying The Summer Prince.