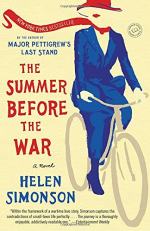 The Summer Before the War: A Novel Summary & Study Guide

Helen Simonson
This Study Guide consists of approximately 45 pages of chapter summaries, quotes, character analysis, themes, and more - everything you need to sharpen your knowledge of The Summer Before the War.

The Summer Before the War: A Novel Summary & Study Guide Description

The Summer Before the War: A Novel Summary & Study Guide includes comprehensive information and analysis to help you understand the book. This study guide contains the following sections:

This detailed literature summary also contains Quotes and a Free Quiz on The Summer Before the War: A Novel by Helen Simonson.

The following book was used to create this study guide: Simonson, Helen. The Summer Before the War. Random House. 2017 Trade Paperback Edition.

The Summer Before the War is a novel of historic fiction by Helen Simonson in which residents from the southeastern rural English town of Rye prepare for, and deal with the early days of World War I. Central to the story are the characters of Hugh Grant and Beatrice Nash. Hugh is a surgeon-in-training in the summer of 1914, studying under master surgeon Sir Alex Ramsey. Hugh also seeks to ask Ramsey’s daughter, Lucy, for her hand in marriage, but the two are away on holiday. Hugh, meanwhile, visits his aunt and uncle, Agatha (one of the leaders of the upper female class) and John (who works for Whitehall). Also visiting Agatha at that point is Hugh’s younger, more handsome, and more adventurous cousin, Daniel. The two are very close, and best of friends. Hugh and Daniel are both enchanted when Beatrice Nash arrives in town.

Beatrice is set to be the new Latin teacher, which is a surprise to most in Rye since Beatrice is a female. Agatha has worked hard behind the scenes to arrange for Beatrice. In a male-dominated society, both Agatha and Beatrice wants greater rights and freedoms for women. Agatha finds the suffragette movement pointless, and seeks to advance women through the system by conclusively proving, through hard action, that women should have greater independence. Beatrice herself approves of the advancement of women, and seeks to do so by her own lifestyle of independence and has a favorable view of the suffragettes. She likewise does not wish to fall in love or marry. Meeting Hugh, however, causes Beatrice to reconsider this. Agatha and Beatrice become good friends and must maneuver through the social circles of Rye through the course of the summer. They are opposed by the wife of the Mayor, Bettina Fothergill, who sees Agatha and Beatrice as upstart challenges to the status quo in which Bettina commands enormous respect and power. Beatrice further suffers a setback when the book she intends to publish on her father is instead given to American writer, Mr. Tillingham, who only later agrees to work together with her on the book.

However, local drama and intrigue take a backseat when John announces sadly that war has broken out on continental Europe, and that Great Britain, including England, will seek to uphold her alliances to friendly nations, and seek to defend the best of Western civilization from countries like Germany. Immediately, locals begin to enlist. The suffragette movement suspends its activities to support the war effort, while the women of the village organize themselves to do their part. They form committees and groups, such as the Belgian Relief Society, in which Belgian refugees are taken in by locals for the duration of the war. Among them are the beautiful, young Celeste and her father. Hugh enlists in the military and becomes a surgeon. Daniel encounters difficulties joining the military as his suspected homosexuality is not morally sanctionable. When it is discovered Celeste is pregnant, gossip in the village leads to moral indignation. It turns out that Celeste was offered by her father to the Germans as payment for saving a library. With this information outed by Celeste, Celeste’s father grudgingly gives permission to Daniel to marry Celeste, to account for both their conditions. With a pregnant wife, suspicions of homosexuality and gossip about pregnancy disappear instantly, and Daniel heads to the front.

Over the course of the next several months, Hugh is exhausted by his work trying to save the lives of countless soldiers. During a terrible artillery bombardment, a number of locals are seriously wounded. Among them is Daniel, who dies being able to get back home to seek better medical treatment. Upon returning home, Hugh must give the news to Agatha, who is horribly upset. Agatha has never been able to have children of her own, so losing Daniel - and the risk of losing Hugh - is tremendously upsetting for her. In an epilogue set in 1920, Agatha, Hugh, Beatrice, and Tillingham go to visit Daniel’s grave in postwar Europe.

More summaries and resources for teaching or studying The Summer Before the War: A Novel.

The Summer Before the War: A Novel from BookRags. (c)2022 BookRags, Inc. All rights reserved.