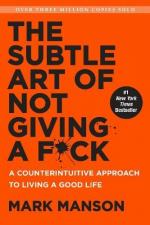 Mark Manson
This Study Guide consists of approximately 51 pages of chapter summaries, quotes, character analysis, themes, and more - everything you need to sharpen your knowledge of The Subtle Art of Not Giving a F*ck.

The Subtle Art of Not Giving a F*ck Summary & Study Guide includes comprehensive information and analysis to help you understand the book. This study guide contains the following sections:

This detailed literature summary also contains Topics for Discussion on The Subtle Art of Not Giving a F*ck by Mark Manson.

The following version of the book was used to create this study guide: Manson, Mark. The Subtle Art of Not Giving A F*ck. Harper One, 2016. First Paperback Edition.

Manson subverts the traditional idea that happiness is a solvable equation or a result of achieving certain goals. Instead, he argues that happiness is an activity and is derived from action, often the action of problem-solving. Thus, problems are actually an opportunity for an individual to create happiness, and happiness is a constant work-in-progress. Manson argues that pain, both physical and emotional, are important feedback mechanisms and that people should avoid denial and a victim mentality when facing pain or problems. Instead, they should find the problems they enjoy solving.

Manson then writes about the dangers of entitlement in a culture that emphasizes the extraordinary. He makes a case for embracing the ordinary, and accepting that you are not special. Achievements, in reality, come from a belief that one is not extraordinary and it is that belief in the need to improve that drives individuals to better themselves and their skills. Manson then turns to the value of pain and suffering in relation to learning, achievement, and finding meaning. He encourages readers to question their personal values and the metrics by which they measure success and failure. He argues that one’s underlying values determine one’s metrics, but that there are both good and bad metrics and values which ultimately shape one’s ideas of success, failure, and happiness.

The author writes that every individual is always making choices in their lives, whether or not they realize it. Choice involves taking responsibility not just for one’s actions, but also for the events in one’s life. Even when one is not at fault for events, Manson argues that one must take responsibility for them by choosing how to respond and how to act in the future. Taking responsibility for our problems is important “because that’s where the real learning comes from” (102). In this section, Manson addresses how people respond to uncontrollable circumstances such as tragic losses and genetic conditions like OCD. He also speaks to the prevailing contemporary culture of “victimhood chic” (110).

Manson writes about the problems with certainty and the dangerous desire to be right all the time. Not only is new evidence constantly changing our understandings of the world, the brain and memory are also a flawed system that make it difficult for people to be truly certain—despite their convictions otherwise. Manson argues that, as we move through life, we don’t move from wrong to right, but rather from wrong to less wrong. He believes that being wrong is not only normal, it is also essential and valuable because learning and self-improvement stem from it. He encourages readers to be less certain of themselves and to question their own thoughts and beliefs.

Manson next focuses on the value of failure as a learning tool and an important step in growth and improvement. Furthermore, not being afraid of failure allows people to take necessary risks. Failure is a relative concept and much of our fear of failure “comes from having chosen shitty values” (151). Manson argues in favor of values that are process-oriented and maintains that pain is part of the process. He encourages readers to choose the pain they are most comfortable with, to embrace it, and to act despite it. He then advocates the Do Something Principle which encourages action first and foremost as a catalyst for motivation and inspiration. Furthermore, this emphasis on action results in greater happiness since happiness comes from activity and problem-solving.

In the next chapter, Manson writes about the value of saying no and of both rejecting and being rejected. While a wide breadth of experience has its time and place, the deepest meaning in life comes from a narrowing of experience. Committing to a place, person, or career requires a natural rejection of alternatives, but it ultimately results in a deeper relationship to those things. Furthermore, being able to give and receive small rejections in a relationship creates greater honestly, and therefore greater trust in that relationship. This increased honesty and trust not only creates stronger relationships, it also helps to foster healthy boundaries within them. Manson writes a great deal about establishing those healthy boundaries and avoiding the co-dependence of an archetypal “victim/saver” relationship.

In the final chapter, Manson writes about death. He encourages readers to face the reality of their own death, because it is the knowledge of death that provides a metric by which life’s meaning is measured. He cautions against the desire to pursue what he called “immortality projects” because the desire for immortality is often driven by bad values. In Manson’s words, “to truly not give a single fuck is to achieve a quasi-spiritual state of embracing the impermanence of one’s own existence” (199).

More summaries and resources for teaching or studying The Subtle Art of Not Giving a F*ck.

The Subtle Art of Not Giving a F*ck from BookRags. (c)2021 BookRags, Inc. All rights reserved.