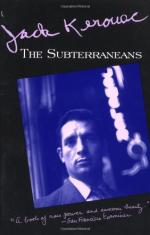 Jack Kerouac
This Study Guide consists of approximately 25 pages of chapter summaries, quotes, character analysis, themes, and more - everything you need to sharpen your knowledge of The Subterraneans.

The Subterraneans Summary & Study Guide includes comprehensive information and analysis to help you understand the book. This study guide contains the following sections:

This detailed literature summary also contains Topics for Discussion on The Subterraneans by Jack Kerouac.

"The Subterraneans" by Jack Kerouac is the story of a group of friends and acquaintances who form a social network that they dubbed 'the subterraneans'. Most in the group are men, and seemingly men who are past their youth. Many in the group are writers and artists or at least wannabes. The main character is Leo Percepied who narrates this stream-of-consciousness work.

Leo just recently arrived in San Francisco. He just ended his position as a messman on a sea-faring ship because of an altercation he had with a fellow ship-mate. But Leo's real profession, or at least the career of his hopes and dreams, is writing. But that pursuit has apparently stalled and is generally mentioned as a future goal. There are reference about getting a typewriter and earning money in the future from writing gigs. This story was written in 1958 before computers were in general use. If Leo was a working writer, he would already have a typewriter and would have writing gigs or writing his own works.

Leo catches up with some old friends of his - the subterraneans as mentioned above - when he returns to San Francisco. The first encounter with the subterraneans that Leo describes takes place in front of a bar where the friends are gathering. This is an appropriate meeting place since, as the story unfolds, it is apparent that most of these friends, including Leo, have substance abuse issues involving both alcohol and drugs. As Leo walks down the hill to the meeting place, he barely makes out the figure of a woman sitting on the fender of a car parked in front of the bar. It is late at night, and the woman, Mardou Fox, is black and from a distance blends into the darkness.

Leo is immediately attracted to Mardou. He becomes obsessed about her and feels he must have her. Initially, she shows no signs of interest in him. She is much younger than Leo, perhaps by as many as fifteen years. However, he continues to pursue her and eventually they become involved in a romantic relationship. Some of his friends who have known Mardou for a while warn Leo not to get involved with her. She has a history of mental illness and is under the care of a therapist. Her mental state is fragile. She is like a ticking time bomb in that no one can predict when she will flip and have a psychotic episode.

Of course, Mardou is not the only one with problems in this story about people with problems! Leo is an alcoholic and has a long history of drug abuse. Although he had been married and is approaching middle age, he lives at home with his domineering mother. Leo doesn't have full-time employment and is taken care of by his mother who works. Leo keeps his relationship with Mardou low-profile because his mother would not approve of a bi-racial relationship. Leo's mother has a huge impact on him and he seems unable to break away from her. Even the unstable Mardou tells him that living with his mother is not healthy for him.

The relationship between Leo and Mardou is short-lived and begins to deteriorate when he continues to be reluctant in fully embracing her and she becomes disillusioned and begins to find a younger man in the group more appealing. At the story's conclusion, Mardou appears the healthier of the two. She tells Leo she wants her independence and Leo is left with the uncertainty of whether Mardou was the love of his life and if he destroyed his one chance for happiness.

More summaries and resources for teaching or studying The Subterraneans.

The Subterraneans from BookRags. (c)2022 BookRags, Inc. All rights reserved.