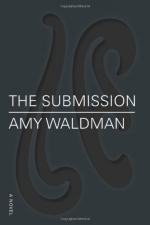 The Submission Summary & Study Guide includes comprehensive information and analysis to help you understand the book. This study guide contains the following sections:

This detailed literature summary also contains Quotes and a Free Quiz on The Submission by Amy Waldman.

The following version of this book was used to create this study guide: Waldman, Amy. The Submission. New York: Farrar, Straus and Giroux, 2011.

The novel begins about two years after the 9/11 attacks. A committee has been formed to choose a design for the 9/11 memorial. They choose from anonymous submissions. The chairman of the committee is wealthy New York resident Paul Rubin. Claire Burwell is the only member on the committee to have lost a loved one on 9/11; her husband worked in the World Trade Center. The committee eventually votes for a specific garden-based design that Claire supports. The committee is then shocked to learn that the person who submitted that design is named Mohammad Kahn and is of Muslim heritage. Mohammad “Mo” Khan is a successful architect who lives in New York City. He was born in the United States. He has faced much discrimination in the time since 9/11, and he has been passed over for promotions at work.

Although the committee decides to keep the selection secret for the time being, a reporter named Alyssa Spier finds out at the competition winner is Muslim, and she publishes an article stating so in the New York Post. After the committee announces their decision of Mo’s design, there is much public outcry due to the fact that Mo is Muslim. Mo enlists the help of a Muslim advocacy group to fight for his rights, as his design was chosen. There is much distress among the committee, who wonder if it will be possible to gain support for a design by a Muslim architect. However, Claire staunchly supports Mo. When people begin to accuse Mo of being anti-American, Claire and Mo are of the opinion that Mo does not need to dignify these xenophobic accusations with a response.

Sean Gallagher, a man whose brother died on 9/11, opposes Mo and his design. He joins an anti-Muslim group in order to help them protest against the selection of Mo. Meanwhile, a Muslim Bangladeshi immigrant named Asma Anwar—whose husband died on 9/11 and who is now raising her son on her own—is quite upset about the rising tie of Islamophobia in America. Mo is mainly interested in being treated fairly as the winner of the completion, but he is averse to the idea that he should become a public advocate for the rights of Muslims in general.

Eventually, the memorial committee organizes a public hearing regarding the issue of the memorial. Mo gives a speech to explain his design, but the crowd angrily interrupts him. Most of the other speakers express xenophobic views. Asma, who has decided to attend the hearing, then asks to speak. She gives an impassioned speech on behalf of all of the oppressed Muslims in America. Alyssa Spier publishes a report exposing Asma’s personal information, and not long after, Asma is attacked by a mob in front of her apartment. Someone stabs her, and she bleeds to death. Horrified by this event, Sean Gallagher ceases his protests against Mo’s memorial design.

By this time, public opposition against Mo has begun to influence Claire’s views. In a private interview, Claire asks Mo to respond to the xenophobic accusations that have been leveled against him. Mo maintains that he does not need to dignify xenophobia with a response. However, Mo eventually becomes discouraged by public opposition, and he withdraws his submission. Mo has become disillusioned about his home country of America, and he worries that the country will never be able to overcome its destructive

The Submission from BookRags. (c)2022 BookRags, Inc. All rights reserved.