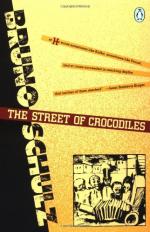 Bruno Schulz
This Study Guide consists of approximately 21 pages of chapter summaries, quotes, character analysis, themes, and more - everything you need to sharpen your knowledge of The Street of Crocodiles.

The Street of Crocodiles Summary & Study Guide includes comprehensive information and analysis to help you understand the book. This study guide contains the following sections:

This detailed literature summary also contains Topics for Discussion on The Street of Crocodiles by Bruno Schulz.

"The Street of Crocodiles" is a collection of short stories by Bruno Shulz, set in a small city in Galicia, in what is now the Ukraine. With rich metaphor and the juxtaposition of fantasy and reality, the stories explore the different themes of the narrator's boyhood, the members of his family and the characters of the city he lives in. The city itself is an important character in the stories as well, it's labyrinth-like streets, it poor and rich neighborhoods and the commercialization of the Street of Crocodiles.

The narrative voice is sometimes overwhelmed by the differences between reality and the mundane. This is a vital symbol in the books, that the mundane is not sufficient enough to understand what is real in the life of a human being. The imaginary, in these stories makes the emotions, the characters and the city much more intense than they actually are, and that much more meaningful.

The majority of the 13 non-chronological stories slice of life stories concerned with the boy's father, Jacob. We watch Jacob fight a losing battle against insanity. Jacob is an exciting and fascinating character whose interests range from the breeding of exotic birds that turn into monsters, to the philosophy of existence. The shame of Jacobs' erratic behavior, of his fear and paranoia distances Jacob from his family. The narrator regrets how his father died, and admires him in retrospect.

There are minor characters that appear in many of the stories, such as Touya, the town's mad girl. In the first short story, "August," the destitute life that Touya lives as a homeless and mentally ill girl, is described in rich detail. Touya is someone isolated from the rest of the city because she, like Jacob, lives inside her own head. The surroundings are vivid for the reader, but invisible to Touya. Other minor characters represent failure or lost promise, like Emil. Emil is the narrator's cousin. He is a relatively young man who has traveled outside the city, but he is dull and sickly. Mr. Charles is another character full of the pathos of failure. Mr. Charles is described waking up and getting ready for the day. In the absence of his wife and children, who have left the city for the summer to escape the heat, Mr. Charles little movements have a passion and personality that is promising. Mr. Charles life is wrapped up in the moments he spends sleeping, dreaming and getting ready for work. As soon as Mr. Charles leaves for work, his individuality leaves him.

More summaries and resources for teaching or studying The Street of Crocodiles.

The Street of Crocodiles from BookRags. (c)2022 BookRags, Inc. All rights reserved.