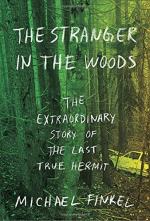 The Stranger in the Woods Summary & Study Guide

Michael Finkel
This Study Guide consists of approximately 47 pages of chapter summaries, quotes, character analysis, themes, and more - everything you need to sharpen your knowledge of The Stranger in the Woods.

The Stranger in the Woods Summary & Study Guide Description

The Stranger in the Woods Summary & Study Guide includes comprehensive information and analysis to help you understand the book. This study guide contains the following sections:

This detailed literature summary also contains Topics for Discussion on The Stranger in the Woods by Michael Finkel.

The following version of this book was used to create the guide: Finkel, Michael. The Stranger in the Woods: The Extraordinary Story of the Last True Hermit. Knopf, 2017. Hardcover.

Michael Finkel’s non-fiction book is divided into 28 chapters. It describes the life of Christopher Knight who disappeared into the woods of Maine in 1986 at the age of 20. He survived for 27 years through his ingenuity, discipline and material goods he has stolen from nearby cabins in over 1,000 burglaries. In all that time, Knight had one verbal interaction with other people. The book details the experience of Christopher Knight’s capture, how he survived and lived in the woods, and his life after his arrest.

The book opens with Knight, approximately 47 years old, leaving his campsite near the end of winter in 2013 to steal food from nearby cabins. He is near starvation after surviving the winter with what he stole the previous fall. This is how he has survived for the past 27 years. He moves through the woods with incredible precision and skill, managing to leave no footprints and to dodge security lights. When he opens the freezer at Pine Tree Camp, a recently installed alarm is triggered.

Terry Hughes, a Maine Game Warden who has known about Knight’s presence for nearly two decades, has had the alarm installed at Pine Tree Camp. He’s woken by the alarm in the middle of the night. As he gathers his gear to capture Knight, he alerts Diane Vance, a Maine State Trooper who has also been aware of the hermit for two decades.

Hughes apprehends Knight as he’s coming out of Pine Tree. Knight drops his backpack of stolen food and offers no resistance. Vance arrives to make the arrest. Once Knight begins to talk, she is amazed at his willingness to tell the truth.

Finkel introduces the cabin owners’ perspectives. Some have been victims of multiple robberies, others, a couple of robberies. Permanent residents were never robbed. All refer to Knight as the hermit. Reactions vary from thinking the hermit was harmless, to feeling violated and robbed of not only material items, but peace of mind.

The author proceeds through the seven months of Knights’ jail-time before he has a court appearance. Finkel describes the media circus around the capture of the Maine hermit and his own fascination with Knight. Interspersed with Knight’s history and details of how Knight survived, the author recounts his contact with Knight through letters and eventually through personal interviews.

Finkel broadens his scope of examination by talking with experts about personality disorders, the history of solitude in our society, and the scientific need for human contact. Along with the theme of outlier, Finkel explores the definition of insanity, questioning if it is insane to want to escape an insane society.

Near the end of the book, Finkel describes Knight’s trial and sentence which includes one more week in jail, and a year of probation that includes weekly check-ins, psychological counseling, and a $2000 fine.

Finkel describes how Knight returns home to live with his mother, is given a job by his brother, and becomes a model parolee. Finkel encounters Knight one more time at his home, where he sees that Knight is not doing well even though all those around him think he’s adjusting. He talks about death and his experiences of seeing ‘the Lady of the Woods’ one winter when he was close to starvation.

In the last chapter Finkel describes how he panics after realizing Knight might kill himself. Finkel approaches him, Knight refuses further contact. Finkel is left with tracking down Knights’ progress through acquaintances he’s met. Finkel ponders what Knight’s life would have been like if he had never been captured, musing that if there had been no record of him, it could have been a life of pure perfection.

More summaries and resources for teaching or studying The Stranger in the Woods.

The Stranger in the Woods from BookRags. (c)2022 BookRags, Inc. All rights reserved.