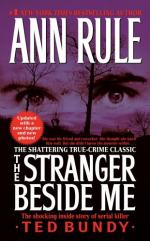 The Stranger Beside Me Summary & Study Guide

The Stranger Beside Me Summary & Study Guide Description

The Stranger Beside Me Summary & Study Guide includes comprehensive information and analysis to help you understand the book. This study guide contains the following sections:

This detailed literature summary also contains Topics for Discussion and a Free Quiz on The Stranger Beside Me by Ann Rule.

The Stranger Beside Me by Ann Rule is a nonfiction book about the author's long time friendship with convicted serial killer, Ted Bundy. Having first met as workers in a Crisis Clinic in Seattle, Washington, in 1971, Ann and Ted's association continues until his execution in January of 1989. As might be expected, Ann's emotions wax and wane through their seventeen-year friendship as Ann rejects and finally accepts the fact that Ted Bundy her friend is also Ted Bundy the serial killer.

Ann Rule was trained in police work, a background which lends itself well to her career as a crime writer for the Seattle police department. Ann's job is to document all the homicide cases for the department, a relatively low paying career but the recently divorced mother of four needs the income that the writing brings in to her family. As a means to extend her training and also to get her out of the house occasionally, Ann volunteers to work on the suicide hotline at a local Crisis Clinic.

While there, Ann meets a charming colleague named Ted Bundy, eleven years her junior, and the two become friends. Ted Bundy is a charming, intelligent college student bound for law school and probably a brilliant career in politics. Ann is touched by Ted's sensitivity and ability to intervene in personal crises for the callers on the hotline. As Ann and Ted have little in common other than their crisis center work, it is doubtful that the two would have ever met otherwise but they do strike up a friendship based on consideration for the other's personal challenges.

In the few years that follow, a rash of abductions and murders of young women terrorizes Seattle and the Pacific Northwest area and Ann's job is to document the police cases. Little does Ann realize at the time that the man committing these heinous crimes is her friend Ted Bundy. Torn between her friendship with Ted and her responsibility to the law enforcement authorities, Ann provides information to her police colleagues about the possibility that Ted is the perpetrator of the crimes against the young women.

Ann loses frequent contact with Ted and eventually the Pacific Northwest crimes subside only to be on the upswing in Utah and Colorado. Unbeknownst to Ann, Ted has moved to Utah and is ultimately accused of the heinous crimes occurring there and in Colorado. Arrested in Colorado for theft, Ted manages to escape Colorado jails twice and flees to Tallahassee, Florida, where he commits more crimes including murder and attempted murder of four young women at the University of Florida.

Ted also abducts, rapes and murders a twelve-year-old girl from a nearby area and is apprehended while trying to leave Florida with a stolen license plate on a stolen car. Ted is ultimately tried for murder, convicted and executed in Florida in January, 1989. This book tells of the ebbs and flows of Ann's friendship with Ted during this turbulent time.

The Stranger Beside Me from BookRags. (c)2022 BookRags, Inc. All rights reserved.