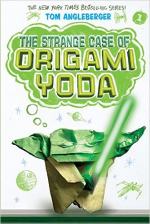 Tom Angleberger
This Study Guide consists of approximately 33 pages of chapter summaries, quotes, character analysis, themes, and more - everything you need to sharpen your knowledge of The Strange Case of Origami Yoda.

This detailed literature summary also contains Quotes and a Free Quiz on The Strange Case of Origami Yoda by Tom Angleberger.

The Strange Case of Origami Yoda by Tom Angleberger, starts out with a quick excerpt by the protagonist, Tommy, explaining about Origami Yoda. The Origami Yoda was made by a child named Dwight who is weird and off putting but manages to give good advice through Yoda. Tommy tells the reader that Dwight is the social pariah of the school. The first chapter is a background summary for the book.

During the PTA Meeting Fun Night, Tommy and his friends sit by the stage and it’s apparent that they are the shy social outcasts. Tommy, Kellen, Harvey, Lance, Mike, and Quavondo stay by the stage and off the dance floor since they don’t have anyone to dance with. Dwight is the outcast of the outcasts and sits with the group too. Dwight ends up bumping into a popular girl, causing her to spill her drink, and the narrator talks about how everything Dwight does after this point is even more embarrassing. Dwight lays down on the floor and mops the drink up with his body before asking her to dance. When Dwight is shot down he returns back to the stage to Tommy’s group. The boys all talk Tommy into asking a popular girl, Hannah, to dance but in reality Tommy likes a girl named Sara. Even though Tommy likes Sara he decides to give asking Hannah to dance a try. As Tommy heads over to her Dwight pops up with an Origami Yoda puppet and advises Tommy to ask it for advice. Tommy shrugs Dwight off, as Dwight is weird, but the boy keeps pestering him until he breaks down and asks the puppet for advice.

Dwight, acting as Yoda, tells Tommy to wait. The group ridicules Dwight and his weirdness until Sara’s gigantic boyfriend arrives beside Sara. Tommy can’t believe that Yoda/ Dwight actually gave him some good advice. The next people Dwight/Yoda helps are Kellen and Mike. Kellen spills water on his pants, making it look like he peed himself. When Kellen asks Dwight/Yoda for advice, Yoda tells him to completely soak his pants so no one can say that he’s peed his pants, this way it buys him time until he can changed into his sweatpants in gym class. Mike cries all of the time and because of this is made fun of. However, Mike mostly cries when he plays softball because he isn’t any good. Yoda/Dwight’s advice to him is that others are just better at softball and that he shouldn’t let that get to him. Mike is so busy trying to understand Yoda’s advice that he doesn’t cry when he strikes out again in softball.

The focus switches to Sara, Tommy’s love interest, as she enters into the story. Sara decides to sit close to Tommy’s table one day. When she does she overhears Dwight/Yoda tell the group to learn a dance called The Twist. Harvey clears up the confusion Dwight causes by saying that The Twist is from the Spiderman 3 Soundtrack. Sara decides that she will go home after school with her friends and look up The Twist. Sara’s grandmother comes into her room when she hears Sara and her friends trying to learn how to dance The Twist and joins in with them. Sara realizes that this is the most fun she’s had since her parent’s divorced. At school the next day Lance comes over to Tommy’s table and takes Dwight’s seat just to be mean. Tommy sticks up for Dwight and causes an argument to ensue between him and Lance which ends with Lance storming off, leaving Dwight’s seat open. Dwight comes over to his seat acting sullen.

In a chapter that is only a paragraph long Tommy lists out all of the reasons why Dwight is weird and the things he has done that prove he is weird. In the next chapter Cassie ends up breaking a statue head of Shakespeare in her class and hides the bust in her backpack. On the bus ride to school Dwight deduces that Cassie has the broken bust in her backpack. Dwight has Cassie ask Yoda what to do and Yoda tells her to make a new bust. Cassie takes some Playdoh from her backpack and forms a new bust, to which the teacher announces in class that it’s better than the old one. People are starting to take notice of the origami Yoda.

A girl named Marcie asks Yoda what word she needs to learn for the spelling bee tomorrow. Yoda tells her she needs to rest and will tell her tomorrow but Marcie is upset and calls Dwight ‘Fart Face’. The next day Dwight/Yoda tells Marcie the word she needs to study is ‘Mulct’. Despite how much Marcie studies she doesn’t get that word and ends up failing out of the spelling bee. Tommy states that the word Mulct means to punish and Tommy inquiries if this is Dwight’s way of punishing Marcie for being rude.

The next people to come to Dwight/Yoda is Quavondo, the Cheetos hog. He wants to know how to get rid of his nickname that he earned in sixth grade. (IN THE PAST) He was on a field trip to the zoo and Quavondo snuck over to the vending machines and bought a pack of Cheetos. He got in trouble with the teacher but they allowed him to eat the Cheetos. Flustered, Quavondo shoved all of the Cheetos into his mouth, almost choking, rather than sharing with his classmates. Back in the present Yoda/Dwight tells him to get Cheetos and give them out during the assembly later on today. Despite getting in trouble for passing out Cheetos, Quavondo redeems himself and loses the nickname. A girl by the name of Caroline is the next person to ask for help. Caroline is lip reader due to hearing problems and wants to know if Dwight will ask Yoda if he could help her with her bully problem since a bully broke all her special pencils. Yoda talks directly to Dwight and states that he will take care of the problem. Later on it comes to light that Yoda attacked the bully to defend Caroline’s honor.

The next day Tommy is absent from school and Kellen takes over narrating. Dwight comes to school in an ugly sweater and it gets out that he is doing this for Caroline. Harvey pesters Dwight about the sweater and some pencils for Caroline. He keeps pestering Dwight so much that Dwight loses his temper and yells at Harvey, getting both of them in trouble at the library but by the time the librarian comes to shush the boys Dwight has already left.

The next chapter switches to Sara narrating. In this chapter, the boys tell Sara and her group that Yoda told them there will be a pop quiz. The girls start to study parts of the leaf of paper that the boys leave for them, Sara included, even though she believes that it’s cheating. In class the pop quiz is given out and the girls all get good grades on it. Sara stays after class to tell on her friends but the teacher says he just thought of the pop quiz on the spot.

A girl named Rondella is the narrator of the next chapter. The chapter is pretty short but Rhondella asks Yoda why Kellen is always bothering her. Yoda tells her that Kellen likes her and that is why he is bothering her. She ends up leaving when Dwight and Kellen argue about Yoda’s predictions and the following chapter is about people listing out all of the answers Yoda has given them.

Tommy is back to narrating the story as he asks Yoda/Dwight about why Sara isn’t interested in him. Yoda/Dwight tells him in oh so many words that Sara does like him. However, when Tommy confronts Dwight about Yoda’s advice Dwight simply says the world ‘purple’, escalating the fight until Dwight walks away. Tommy tries to apologize to Dwight for his behavior and wants to talk with Origami Yoda again but Dwight continues on his way.

The next day Tommy stops by Dwight again and asks what Yoda meant about Sara liking him. Dwight says ‘purple’ once more and Tommy loses his temper again. He tells Dwight that he needs to start being normal and Dwight has finally had enough. He stands up and crumples Origami Yoda into a ball before throwing him away. He tells Tommy that if he should be normal then he has no reason to hold onto Origami Yoda. At lunch Dwight is crying because he doesn’t remember how to make Origami Yoda again. Harvey tries his own hand at making an Origami Yoda and starts giving out bad advice that seems good. Harvey also tells Tommy that Sara doesn’t like him and when Tommy is upset laughs at him behind his back. Dwight, however, tells Tommy that Sara does like him in a ‘Yoda voice’ before stating that he woke up that morning and remember how to make Origami Yoda again.

Dwight criticizes Harvey’s Origami Yoda, leading Harvey to try and destroy Dwight’s second Origami Yoda. Tommy gets in the way and it’s decided that there will be an Origami Yoda contest to see which is the better Yoda. The winner would be decided by Tommy asking Sara to dance with him at the next dance. If Sara says yes then Dwight wins but if she says no Harvey wins. The next chapter is about Tommy at the dance undecided on if he is going to ask Sara to dance or not. Tommy wants to side with his friend Harvey but in the end decides that Dwight’s Yoda is the winner. At another dance Tommy finds Sara in the crowd and realizes that if he wants to tell Sara he likes her then it will be in front of all of her friends. Tommy struggles with which Yoda he should listen to, despite picking a winner but sees Dwight dancing with that girl Caroline. Dwight comes over holding Caroline’s hand, wondering if Tommy has talked with Sara yet before telling Tommy not to be nervous since Sara told Dwight she liked Tommy. Seeing those two together gives Tommy the courage to go ahead and ask Sara to dance.

As Tommy is heading over to Sara, Harvey reminds Tommy that he can’t dance, trying to get Tommy to stop. At that moment the DJ busts out “The Twist” the song Dwight had told them to learn earlier. Both Tommy and Sara know how to dance the Twist, and in the end Tommy asks Sara to dance and they end up dancing the night away.

More summaries and resources for teaching or studying The Strange Case of Origami Yoda.