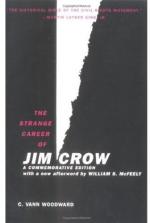 This detailed literature summary also contains Topics for Discussion and a Free Quiz on The Strange Career of Jim Crow by C. Vann Woodward.

The term Jim Crow refers to a large body of law and social custom which served to establish and maintain segregation of the races in the South following the end of Reconstruction and moving into the mid-twentieth century. In his book, The Strange Career of Jim Crow, C. Vann Woodward provides a complete historical accounting and significant analysis of its advent, its impact on race relations within and outside of the South, and its legal demise by 1965.

Woodward posits the existence of two "reconstructions" in the South. The first occurred at the end of the Civil War, with the occupation by radical Republican forces, who enforced the emancipation and equal rights Amendments to the Constitution. This first reconstruction lasted until 1877, when the Great Compromise allowed the peaceful election of a President and the removal of all Northern occupational forces from the South. At this point, the South had choices to make regarding race relations, and the victorious approach was to establish a large body of codified statutes, named Jim Crow, to vigorously and completely separate whites and blacks. The second reconstruction began quietly at first, with desegregation of a few institutions, most notably the U.S. military, and a series of Supreme Court decisions, providing for integration of public facilities and institutions, most notably state-operated public schools. As blacks and white liberals pushed for implementation of new law and Court decisions, however, an independent, recalcitrant South fought back. The resultant conflict between Southern state governments and forces for integration, supported by the federal government, opened old wounds, to be certain, and periods of violence and backlash have ensued. The Civil Rights Act of 1964, and the Voting Rights Act of 1965, officially marked the end of Jim Crow.

Jim Crow is legally dead. To conclude that its demise has resulted in the concurrent demise of segregation, anger, and bitterness between the races, however, is fallacious. Attitudes, beliefs, social customs and de facto segregation cannot be legislated. Certainly the growth of large urban centers in the South and the movement of the United States into a leadership role in a world in which the white race is a minority, together with more opportunity for races to converge, has promoted greater social and economic equity for a growing middle class black population. The majority of blacks, however, remain in urban slums in both the North and South, with less than equal opportunity to pursue the "American Dream" of Martin Luther King. Until these inequities are resolved, moreover, racial tension will continue to impact not just the South, but the entire nation.