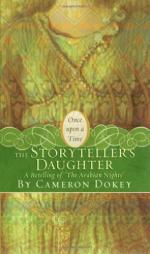 Plot Summary
+Chapters Summary and Analysis
Prologue - Chapter 2: If You Would Know, How the Story Begins, The Tale of the Girl Who Wished to Be What She Is Not
Chapter 3: Sorrow
Chapters 4-6: How Shahrazad is Bold, In Which the Vizier Takes a Chance, The King Takes a Wife But Receives a Surprise
Chapter 7-8: In Which Hidden Things Begin to Reveal Themselves, Dinarzad Sets the Future in Motion
Chapters 9-10: The Tale of the Knight Who Thought He Could Outshine the Stars, Shahrayar Surprises Many, But Himself Most of All
Chapters 11-12: A Plot, Shahrazad Is Joyful, and the Conspirators Make a Discovery
Chapter 13: Shahrazad Resumes Her Tale
Chapters 14-15: The Calm Before a Storm, A Sunlight Story
Chapters 16-17: The Tale of the Fisherman, the Prince, and the Water Bearer's Daughter, How the Water Bearer's Daughter Finds the Fisherman, the Treasure, and Her Heart. And How the Story Finds its End. In That Order.
Chapters 18: Dinarzad Pulls a Thread
Chapters 19-21: In Which 'Ajib Learns to See His Heart, The Eyes of the Heart, All the Threads Are Woven Up
Characters
Objects/Places
Themes
Style
Quotes
Topics for Discussion
Order our The Storyteller's Daughter Study Guide

Cameron Dokey
This Study Guide consists of approximately 52 pages of chapter summaries, quotes, character analysis, themes, and more - everything you need to sharpen your knowledge of The Storyteller's Daughter.

This detailed literature summary also contains Topics for Discussion on The Storyteller's Daughter by Cameron Dokey.

A long time ago, a good and just king has two sons, Shahrayar and Shazaman. Upon his death, the two sons divide his kingdom equally and hold each other in high esteem. The vizier of the father becomes the vizier of the son, Shahrayar. He too is also a good and just man. While on an expedition in a far off land, the vizier falls in love with a storyteller named Maju, whom he brings back to his native land. Both she and the daughter she bears, Shahrazad, are considered outsiders in their home, though future king Shahrayar maintains a curiosity about Shahrazad from childhood. Maju teaches Shahrazad to have faith in herself and not worry about being different.

After the other children are cruel to her, Shahrazad renounces society and chooses to live a solitary life, especially after Maju dies and Shahrazad magically inherits her blindness. There is a prophecy that Shahrazad may be the greatest storyteller of all time. Maju tells her that it is her fate to save the heart of a nation. The king (still Shahrayar's father) forces the vizier to marry a new woman, who bears a daughter and immediately dies of shame, leaving Shahrazad to raise her sister Dinarzad.

After Shahrayar ascends to the throne, both he and Shazaman discover their wives in plots to betray and overthrow them. They kill their wives in the name of justice, but not before Shahrayar's wife curses him to a life without love. Shahrayar reacts badly to this dishonor, and turns his heart to stone. He puts forth a decree that he will henceforth marry once a month for one night only, executing his brides in the morning so they cannot betray him. If a maiden volunteers for the role of first wife, all those who come after her will merely be imprisoned.

Shahrazad volunteers to marry Shahrayar, despite the protests of her father and sister. She believes that this is the fate she was born for and is determined to guide Shahrayar back to his heart. She devises a plan, using her sister as a catalyst, to get Shahrayar involved in an endless nightly story, buying herself time to learn his heart and teach him of her own. Unsuspecting, Shahrayar finds himself happily entranced by the story and his new wife, and surprises himself and his people by now declaring that until the story ends, Shahrazad may live.

Meanwhile, the five brothers of Shahrayar's first wife decide to seek revenge against Shahrayar for dishonoring their family. Once a royal family themselves, they intend to put the eldest brother back on the throne. They send the youngest, 'Ajib, to live as a serving boy in the castle to help find a weakness they can exploit. 'Ajib, a clever teen, quickly inserts himself directly into the king's family life, befriending Dinarzad, and discovering Shahrayar's weakness for Shahrazad.

Shahrayar and Shahrazad also develop feelings for the other, but neither is willing to speak them aloud for fear that the other does not reciprocate. They spend more time with each and Dinarzad, still fearing her sister's life is in jeopardy, but also jealous of their growing closeness, insinuates that Shahrazad manipulated Shahrayar with her story to keep herself alive. Shahrazad protests she acted as she did to give herself a chance to get to know Shahrayar's heart but he feels betrayed again, but before he can fully react, the brothers, on 'Ajib's word, infiltrate and overthrow the king. They lock the king and queen away separately to stew.

Ajib regrets his involvement with his brothers' plot, recognizing that his brother is a heartless, selfish leader. He sets out to assist Shazaman in mounting a resistance. Deciding to kill two birds with one stone, the brothers condemn Shahrazad to death for sorcery, but offer her the chance to keep Shahrayar alive if she can recognize him without speaking or touching. Shahrazad realizes that in order to save him she must reveal her true feelings for him even if he rejects her. Before all the court, Shahrazad picks her husband out from all the prisoners and tells him she loves him. Shahrayar looks into his own heart and discovers he feels the same way. Their reunion is interrupted by Shazaman and an army to defeat the usurper. Without any bloodshed, Shahrayar and Shahrazad convince the people to pledge their allegiance to Shahrayar, who was a much better leader and who cared for them. Ajib renounces his brothers and is accepted as a member of the family of Shahrayar. Having fulfilled her fate, Shahrazad recovers her sight. Everyone lives happily ever after.

More summaries and resources for teaching or studying The Storyteller's Daughter.