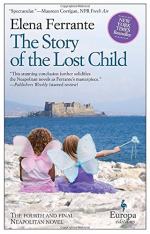 The Story of the Lost Child Summary & Study Guide

The Story of the Lost Child Summary & Study Guide Description

The Story of the Lost Child Summary & Study Guide includes comprehensive information and analysis to help you understand the book. This study guide contains the following sections:

This detailed literature summary also contains Quotes and a Free Quiz on The Story of the Lost Child by Elena Ferrante.

Ferrante closes out her Neapolitan tetralogy with The Story of the Lost Child, which picks up Elena’s and Lila’s story around age 30 and follows them until the day Elena mentions in the very beginning; when Lila walks away without a trace at the age of 66.

The story begins where the third novel stops, with Elena flying away to a conference with Nino Sarratore. She has loved Nino, a successful political writer, since childhood, and even when he chose Lila over her when they were teens. Elena and Nino begin the novel in France after Elena has left a hasty note for her husband and daughter.

Several years pass in narration in which Elena juggles many things: disappointment from all quarters for destroying her marriage, moving forward with Nino, raising her daughters, and promoting her book with a fledgling publishing house in France. She makes a conscious decision in this period to choose Nino and her career over her young daughters, who spend these formative years with Pietro’s parents in Genoa. After an insurmountable fight with her mother-in-law, Elena moves to her sister-in-law’s in Milan, having left Nino when she hears that his wife—whom he has not left—is seven months pregnant. While living with Mariarosa, Elena spends some time with her ex-lover Franco Mari and eventually finds his body after his suicide.

Following this stark event, which so deftly shows how fleeting success and influence is, Elena finally flees to Naples. There, Nino has set up an apartment for her in a nice part of the city, and for years she lives a half-life with him while trying to write and raise her daughters in Naples, but not of the neighborhood of her youth. During this period, Elena sees Lila often, but is not truly allowed in the fold of the neighborhood. Elena also continues to juggle—at times unsuccessfully—her lover, her children, and her career.

Elena becomes pregnant, and a happy time ensues during which she and Lila, who is also pregnant, enjoy a close rekindling of true friendship. They experience an earthquake together and work together through Elena’s mother’s illness. Days after Elena’s third daughter is born, Elena's mother suffers a hemorrhage that eventually takes her life. Lila’s third daughter is born soon after, and the women and babies slowly grow through life together.

During this period Elena continues to write but cannot lay her hands on her next real project, one which she has already promised to her editor. When her third daughter is a baby, she returns home unannounced and finds Nino making love to the servant in the most demeaning way possible. She throws him out and enters a period of vast difficulty. Leaving him is hard and she is trying to keep the girls happy while finding a new voice. On a whim she submits an old manuscript to her editor—one she wrote a decade earlier while still living in Florence. The story skirts around the issues in the neighborhood, the fight between the Fascists and the Communists, and implicates while not naming the Solara brothers.

Elena’s editor loves the novel, specifically stating that moving to Naples and being part of the problem has improved her writing. Buoyed by his confidence, she moves into the apartment above Lila so she can truly rejoin the neighborhood.

For the next several years, the women fall into a rhythm of tending to one another’s children while Elena writes and Lila runs her computer business with her lover Enzo Scanno. Elena’s novel, when published, causes a huge stir in the neighborhood with its oblique references to the Solaras. They pressure Carmen to sue Elena and threaten her. Although she is frightened, Elena continues to write, hoping that her public face will protect her. She and Lila come together and write down everything they feel the Solaras should be arrested for, but the lawyers and editors feel it will not do any good.

For a while the tension grows quiet. Elena feels like her youngest daughter is developing poorly because of her lack of a father. She arranges for Nino to come spend the day with her, but Lila takes over the day, sending her Tina to visit as well. Everyone descends into the market to enjoy sweets, and in the midst of the chaos, Tina disappears. For days, weeks, months, Naples is mobilized in efforts to find her, to no avail. It is the hinge on which the book swings.

Lila cannot recover. She is sad, then manic, then cruel, then depressed; Elena helps as she can but is still writing and needing to travel. Her older daughters are in their teens by this point and she begins to see the fruits of her constant travel in the form of disobedience and a lack of respect. The novel rapidly dwindles in action in this period; many people die either naturally or are murdered. Lila and Enzo sell their business and split up. Elena’s daughters both fall in love with Lila’s son and cause a huge family rift which results in both daughters eventually moving to the United States. Nino slowly fades from relevance in Elena’s life. Elena’s writing career steadily grows more and more successful.

The novel closes when the women are old. Elena has moved to Turin while Lila has remained in the small Naples community. Elena eventually writes the story of Tina’s disappearance, and Lila cuts off all contact from her, and eventually walks away from her life forever. In the epilogue, Elena receives a strange package—it is the dolls Tina and Nu, that belonged to her and Lila when they were six, thought lost for the past six decades.

The Story of the Lost Child from BookRags. (c)2022 BookRags, Inc. All rights reserved.