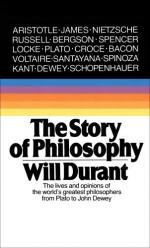 Will Durant
This Study Guide consists of approximately 71 pages of chapter summaries, quotes, character analysis, themes, and more - everything you need to sharpen your knowledge of The Story of Philosophy.

The Story of Philosophy Summary & Study Guide includes comprehensive information and analysis to help you understand the book. This study guide contains the following sections:

This detailed literature summary also contains Topics for Discussion and a Free Quiz on The Story of Philosophy by Will Durant.

Will Durant is the author of a 704 page book titled The Story of Philosophy. This work describes the lives and opinions of the greater philosophers. The period of time covered begins in the early centuries before Christ (B.C.) with the famous Greek philosophers Socrates and Plato. Aristotle and beginning Greek science are presented as these early centuries close. The following fifteen hundred years are summarized with moderate historical detail. Durant provides little historical information about Thomas Aquinas, Scholasticism and other philosophical schools of slight interest to him. He states this period of European domination by Roman Catholicism is led by medieval theologians who turn the thought of Aristotle into the foundation for medieval theology.

Durant skips over the dark period of thought from Aristotle to the Renaissance. Francis Bacon summarily rejects these centuries of philosophical misuse by opposing the cult of Aristotle. He resolves to turn philosophy from scholastic arguments into the illumination and increase of human good. Bacon begins his project for the great reconstruction of philosophy in the late sixteenth century. Spinoza brings a fresh perspective on Aristotle, the early Greeks and the dark period of thought. The effects of illumination Bacon seeks become unstoppable with Voltaire, Rousseau and the French Enlightenment and Revolution of the eighteenth century. Voltaire's romances, trips to the Bastille and exile to avoid recapture add humor to sections about his part in the French Revolution.

Immanuel Kant introduces the nineteenth century to dominant German idealism. His work over sixty years of seclusion bursts onto the world of philosophy like Voltaire's record-breaking first play. Hegel's dominance builds on Kant's despite his desire for "a place to live with simple food, many books and good beer." Schopenhauer tests his fame by scheduling his lecture to conflict with Hegel's. Schopenhauer confirms his reason for pessimism by lecturing to empty seats while Hegel's lecture hall is full. The author says Schopenhauer almost becomes an optimist by playing flute after he eats dinner alone.

The personalities and experiences of these philosophers and others, including Spencer and Nietzsche, end Durant's story of nineteenth century philosophers. Three philosophers each are presented in contemporary European and American philosophers. Durant writes the Story of Philosophy to provide a personal dimension to the study of philosophy. The author's goal for the book is to humanize the knowledge of speculative thought via selected dominant philosophers. He writes as an objective historian of personal facts, stories and philosophies of these philosophers. Durant's writing is full of stories about them that enliven the book. Despite the length of this book Durant uses a format that helps to maintain a sense of order and understanding in the information he presents to cover twenty-five centuries. The book's subsection and subheading titles are useful guideposts to the content in each chapter. A glossary and index are available to further assist in the understanding of unfamiliar terms.

More summaries and resources for teaching or studying The Story of Philosophy.

The Story of Philosophy from BookRags. (c)2022 BookRags, Inc. All rights reserved.