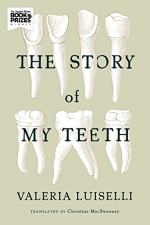 Related Topics
Tell Me How It Ends: An Essay in 40 Questions
Lost Children Archive

The Story of My Teeth Summary & Study Guide

Valeria Luiselli
This Study Guide consists of approximately 34 pages of chapter summaries, quotes, character analysis, themes, and more - everything you need to sharpen your knowledge of The Story of My Teeth.

The Story of My Teeth Summary & Study Guide Description

The Story of My Teeth Summary & Study Guide includes comprehensive information and analysis to help you understand the book. This study guide contains the following sections:

This detailed literature summary also contains Quotes and a Free Quiz on The Story of My Teeth by Valeria Luiselli.

The following version of this book was used to create this study guide: Luiselli, Valeria. The Story of My Teeth. Coffee House Press, 2015.

The Story of My Teeth follows the life of the protagonist, Gustavo Sánchez Sánchez, as he recounts his life to the reader. He begins by saying that he is the best auctioneer in the world and that he was born in the city of Pachuca, Mexico. When he was young, he and his parents moved to the Mexican city of Ecatepec. When Gustavo was 21, he began to work as a security guard for a juice factory in Ecatepec. At age 40, he was promoted to “personnel crisis supervisor” and married a woman named Flaca. They had a son, Siddhartha, but they soon divorced, as Gustavo felt that Flaca had become emotionally abusive. Gustavo then trained as an auctioneer and soon had much success in the profession.

Father Luigi Amara, priest of a local church called Saint Apolonia’s Parish, requested Gustavo to hold an auction to raise funds for the church. Gustavo, who had recently had his teeth surgically replaced, decided to auction off his old teeth. During the auction, Gustavo claimed that each tooth belonged to a different famous person or historical figure, including Plato, Saint Augustine, and Virginia Woolf. Realizing that his estranged son, Siddhartha, was in the crowd, Gustavo then put himself up for auction, and Siddhartha bought him. Gustavo awoke the next morning in a strange room and realized his teeth were missing. In a nearby room he found Siddhartha, who had likely stolen his teeth. Siddhartha then proceeded to torment his father by calling him by the wrong name, challenging him to interpret confusing parables, and demanding that he go on various ridiculous errands. Gustavo decided to leave the building, which turned out to be the art museum where Siddhartha was a curator.

At a nearby coffee shop, Gustavo met a struggling writer named Jacobo de Voragine. They quickly formed an acquaintance, and Gustavo asked Jacobo to help him write a book about his life. He said that in return, he would give Jacobo lodging and would tell him stories about the city so that Jacobo could start a tourism business. Jacobo agreed to the arrangement. Gustavo and Jacobo later returned to Gustavo’s house to find that Gustavo’s collection of valuable items—which Gustavo had hoped to auction off someday—had apparently been stolen. Gustavo and Jacobo went out to get some dentures for Gustavo. One night, they broke into the art museum where Siddhartha worked and found Gustavo’s teeth on a pedestal there. They took the teeth, as well as several pieces of art. Gustavo later decided that he would want to hold an auction for the items using a new “allegorical” method of auctioning that he had invented. For each item, he wrote a brief story that used the items as loose inspiration. However, he then realized that he could not auction off the artworks without being arrested for stealing them, so he disposed of them in a junkyard. Siddhartha was soon arrested for the theft of the artworks.

The narrative then switches to Jacobo’s point of view. Jacobo addresses the reader directly and says that while much of Gustavo’s account of his own story was true, parts of it were not. For example, Gustavo had had no say in his divorce. Flaca had left him while he was out of town for an auctioneering training course. Also, Gustavo had never had any success as an auctioneer, and his collection of supposedly valuable items was nearly worthless. Gustavo eventually died, and his ashes were spread in Pachuca. Under Gustavo’s deathbed, Jacobo had found a note that Gustavo had written. It contained apologies to Siddhartha for being an inattentive father and for indirectly causing Siddhartha’s arrest. The book then features a series of photographs depicting places and other things that inspired different parts of the novel. The final section of the book features a timeline of Gustavo’s life, major Mexican political events, and various events related to real people referenced in the novel.

More summaries and resources for teaching or studying The Story of My Teeth .

The Story of My Teeth from BookRags. (c)2022 BookRags, Inc. All rights reserved.