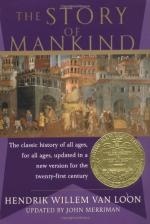 Hendrik Willem van Loon
This Study Guide consists of approximately 32 pages of chapter summaries, quotes, character analysis, themes, and more - everything you need to sharpen your knowledge of The Story of Mankind.

The Story of Mankind Summary & Study Guide includes comprehensive information and analysis to help you understand the book. This study guide contains the following sections:

This detailed literature summary also contains Topics for Discussion on The Story of Mankind by Hendrik Willem van Loon.

"The Story of Mankind" by Hendrik Willem Van Loon is a tale of mankind's development from the nothingness of the origins of the planet through modern day science and technology. Written early in the 20th century, the information in the novel is clearly dated, but still manages to provide a base for young readers as to the origins of man. Engaging and entertaining, this book is a must read for any audience.

"The Story of Mankind," a hopelessly out-of-date scientific account of the rise of mankind, is an ambitious attempt by Hendrik Willem Van Loon to explain to a young audience how mankind came to be. Beginning with the creation of the world and traveling through the late 1920's, the scope of the work is breathtaking, if not still accurate. This version also includes several updates that bring the story to more modern times, but without altering the historical writings. While the work is quite clearly out of date, it is an entertaining read, and shows how much mankind has grown in his knowledge of our origins even in the previous century alone. In addition, the book adds several handwritten illustrations and diagrams that not only help to explain the information presented, but also serve as a charming testament to the author's sense of humor. The book is easy to read, light, and offers, at the very least, a humorous look at the world as one viewed it in 1920.

The novel begins with a joyful account of the author's own journey to find enlightenment, which gives a sense as to why the book was written. The author then travels from the origin of the plant through prehistoric man. From Egypt to the Middle Ages, the author then tells briefly of various cultures that helped to increase scientific knowledge over time, including the origins of the alphabet, farming, writing, government, theater, and everything in between. He discusses major battles that changed the course of history, as well as focusing on Greek and Roman civilizations. Also covered are origins of various religious sects, revolutions, the evolution of Europe, and World War I. Finally, in the last section, John Merriman, a professor of history, has written an update to the book. This update covers the years since Van Loon's time through current times, and includes such topics as the exploration of space, the Cold War, medical and scientific advancement, and the role of developing countries. Cleverly written and witty enough to engage the reader throughout, "The Story of Mankind" is one for all levels of readers to enjoy.

More summaries and resources for teaching or studying The Story of Mankind.

The Story of Mankind from BookRags. (c)2022 BookRags, Inc. All rights reserved.