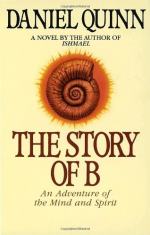 The Story of B Summary & Study Guide

Daniel Quinn
This Study Guide consists of approximately 51 pages of chapter summaries, quotes, character analysis, themes, and more - everything you need to sharpen your knowledge of The Story of B.

The Story of B Summary & Study Guide Description

The Story of B Summary & Study Guide includes comprehensive information and analysis to help you understand the book. This study guide contains the following sections:

This detailed literature summary also contains Topics for Discussion and a Free Quiz on The Story of B by Daniel Quinn.

The Story of B by Daniel Quinn is a novel written in the epistolary style which challenges some of the fundamental constructs of the religions in the modern world, as well as the culture that exists worldwide. Jared Osborne, a priest of the Laurentian order, is sent to investigate the claim that Charles Atterley, otherwise known as B, may be the Antichrist. During his assignment, Jared becomes converted to B's way of thinking, causing many problems for himself as he loses faith and quits the priesthood. The Story of B is a fascinating and intriguing story that causes one to deeply reconsider the culture of the modern world.

Jared Osborne, a priest of the Laurentian Order, is sent to Germany on an assignment by Fr. Lulfre, his superior, to investigate the claims that Charles Atterley is the Antichrist. In Munich, Herr Reichmann directs him to inquire about Charles Atterley at Der Bau, where Jared first hears one of B's lectures. Jared becomes acquainted with B during his investigation, attending B's lectures and becoming a disciple of sorts. At first, Jared sees this as a part of his assignment, but he is eventually converted to B's beliefs. Jared faxes transcripts of B's lectures to Lulfre as he continues his studies with Charles Atterley. After a lecture at the university in Stuttgart, Charles Atterley is assassinated on the train returning to Radenau.

After Atterley's death, Shirin, his assistant, becomes B and continues Jared's training. Using a bricolage, she explains to Jared about animism, the Law of Life and the Community of Life. Jared looks forward to her first appearance as B the next night at Schauspielhaus Wahnfried; however, he awakes several days later to find that he has been hospitalized with amnesia after an explosion at the theater. Jared is sent back to America to the Company Farm, a recuperation facility for seminaries. Realizing the potential disaster that is in store for him, Jared escapes from the Company Farm and seeks Lulfre.

When Jared confronts Lulfre, Lulfre admits to ordering Charles Atterley's assassination, as well as the explosion at the theater, which was designed to exterminate the remainder of B's inner circle. Jared tells Lulfre that he has failed because he is now B. Jared leaves the priesthood and returns to Radenau to search for Shirin and Michael. After much futile effort, Jared is able to remove the obscuring lenses of the Great Forgetting and produce an insight reminiscent of B. He finally locates Shirin and Michael at Michael's chalet twenty kilometers west of Radenau. Jared leaves the manuscript of his journal with Michael when he and Shirin flee to hide from Lulfre and his assassins. Jared tells the reader that now they are B, and there is no going back from how they have been changed by reading his journal. The final third of the book provides Jared's transcripts of B's lectures: The Great Forgetting, The Boiling Frog, The Collapse of Values, Population: A Systems Approach, and The Great Remembering.

The Story of B from BookRags. (c)2022 BookRags, Inc. All rights reserved.