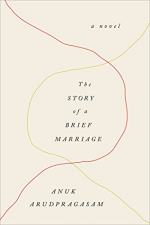 The Story of a Brief Marriage: A Novel Summary & Study Guide

Anuk Arudpragasam
This Study Guide consists of approximately 61 pages of chapter summaries, quotes, character analysis, themes, and more - everything you need to sharpen your knowledge of The Story of a Brief Marriage.

The Story of a Brief Marriage: A Novel Summary & Study Guide Description

The Story of a Brief Marriage: A Novel Summary & Study Guide includes comprehensive information and analysis to help you understand the book. This study guide contains the following sections:

This detailed literature summary also contains Quotes and a Free Quiz on The Story of a Brief Marriage: A Novel by Anuk Arudpragasam.

The following version of this book was used for the creation of this study guide: Arudpragasam, Anuk. The Story of a Brief Marriage. Flatiron Books, 2016.

Over the course of a single day and night, an alienated Dinesh is presented with an opportunity to reconnect to the world within his Sri Lankan Tamil refugee camp. A man offered Dinesh his daughter’s hand in marriage, forcing Dinesh to consider what he wants from his life. Along the way he grapples with the possibility of living beyond simply existing in his present condition.

The narrative opens with a focalized view of the dangling arm of a six-year-old boy hit by shrapnel. As Dinesh carries the boy, he appears be to desensitized to the trauma of the situation. This introduction jars the reader into the devastation present in the daily life within a refugee camp, made even more disorienting by the apparent acceptance of their situation. The novel unfolds a temporally complex narrative of how trauma permeates physical, emotional, mental and linguistic states. At the same time, in the midst of all this devastation arises a hope for tangible human connection through marriage.

Diegetic events establish the pace of the story and set the narrative in motion—like Mr. Somasundaram’s proposal, and the war between the government of Sri Lanka and the movement. Both events are revisited in Dinesh’s mind as he interprets how to move forward in the present moment. Dinesh’s memories present a timeline of conflict that build to the all-out war in which he currently finds himself embroiled. While the narrative proper only takes place in a day, Dinesh’s memories provide a cache of characters and situations that demonstrate life before the camp. His memories also hold his only existing connection to family. The novel observes, through a juxtaposition of past and present, how human relations are tested under extreme duress. After six months of being moved from camp to camp, losing people and possessions along the way, the proposition of marriage takes on additional meaning. Foregoing the customary tradition of finding a suitable match, the union is both something to experience before death, and a bond that could discourage conscription into the war. The cultural value of marriage shifts from a proper societal match to a protective grouping.

Dinesh’s introspection frequently leads to a focalization on the body. Its functions fascinate and disgust him. The thought of losing it saddens rather than scares him. The language of the novel lays bare the nature of the human body. Taboo bodily functions of bowel movements and erections are described in all candor. Details of torn limbs are littered throughout the text. The body presents a dilemma to Dinesh; it acts autonomously in keeping him alive even though he is not sure what he continues to live for. It is also a reminder of his vulnerable position during Sri Lanka’s civil war; as an able bodied man, he is a prime target for conscription. As a civilian in a refugee camp, he, along with the tens of thousands of other inhabitants, is a target for government bombs.

The book concludes as another day breaks, with shells falling over the encampment much as it did prior to the beginning of the narrative. This time Dinesh is not as removed from the occurrence. In his brief marriage to Ganga, he re-opened himself to the outside world. The novel leaves Dinesh catatonic, processing the latest loss in his life.

More summaries and resources for teaching or studying The Story of a Brief Marriage: A Novel.

The Story of a Brief Marriage: A Novel from BookRags. (c)2022 BookRags, Inc. All rights reserved.