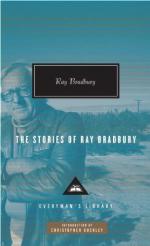 The Stories of Ray Bradbury Quotes

Ray Bradbury
This Study Guide consists of approximately 55 pages of chapter summaries, quotes, character analysis, themes, and more - everything you need to sharpen your knowledge of The Stories of Ray Bradbury.

Until this day, how well the house had kept its peace. How carefully it had inquired, "Who goes there? What's the password?" and, getting no answer from lonely foxes and whining cats, it had shut up its windows and drawn shades in an old-maidenly preoccupation with self-protection which bordered on a mechanical paranoia.
It quivered at each sound, the house did. If a sparrow brushed a window, the shade snapped up. The bird, startled, flew off! No, not even a bird must touch the house!
The house was an altar with ten thousand attendants, big, small, servicing, attending, in choirs. But the gods had gone away, and the ritual of the religion continued senselessly, uselessly. (p. 77)

The dinner was fine that night. Mom had run about the kitchen with handfuls of cinnamon and dough and pots and pans tinkling, and now a great turkey fumed on the table...

More summaries and resources for teaching or studying The Stories of Ray Bradbury.

The Stories of Ray Bradbury from BookRags. (c)2022 BookRags, Inc. All rights reserved.