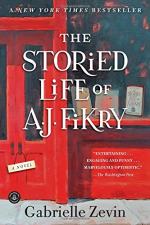 The Storied Life of A. J. Fikry Summary & Study Guide

Gabrielle Zevin
This Study Guide consists of approximately 89 pages of chapter summaries, quotes, character analysis, themes, and more - everything you need to sharpen your knowledge of The Storied Life of A. J. Fikry.

The Storied Life of A. J. Fikry Summary & Study Guide includes comprehensive information and analysis to help you understand the book. This study guide contains the following sections:

This detailed literature summary also contains Quotes and a Free Quiz on The Storied Life of A. J. Fikry by Gabrielle Zevin.

"The Storied Life of A.J. Fikry" is just that: the story of A.J. Fikry's life, told in short-story narrative form over the course of two parts and 13 chapters. Each chapter is titled after a book, though there is no pattern to the titles other than the fact that they give a slight hint as to what will be discussed or described in the forthcoming chapter. Each chapter begins with an introduction, which the reader learns early on are book notes from A.J. to his daughter Maya.

At the beginning of the novel, A.J. is a widower who doesn't like living alone but has resigned himself to it. He misses his late wife, Nic, and tends to dream about her when he's upset or lonely. A.J. owns Island Books, the only bookstore on Alice Island, an island in the Cape Cod, Massachusetts, region. His two friends are Daniel Parish, an author, and Daniel's wife Ismay, who is Nic's sister. Knightley Press book rep Amelia Loman comes to visit A.J. during one of his particularly lonely times, and he rejects every book she offers. Soon after, A.J.'s rarest book, "Tamerlane and Other Poems" (referred to almost solely as "Tamerlane" throughout the novel), is stolen from his apartment above the bookstore on a night when he has passed out from drinking too much alcohol. A.J. begins to leave the door to Island Books unlocked, as he believes there is nothing left to be stolen.

Upon returning from a run one evening, A.J. finds the bookstore's door open. He left it unlocked, but he's sure he didn't leave it actually open. When he investigates inside, he finds a toddler named Maya with a note pinned to her from her biological mother, asking the owner of the bookstore to care for Maya because she is unable. Though Maya and A.J. get along well right off the bat, A.J. takes Maya to the police station to see what he should do. Since it's 9 p.m. on a Friday night, Chief Lambiase tells him they'll have to wait until Monday for any help from social services. Before the weekend is over, the body of Marian Wallace, Maya's biological mother, washes up on the shores of Alice Island.

After a weekend of bonding with Maya and realizing that he enjoys the company, A.J. decides to adopt Maya. The two get along well and A.J. learns as he goes in regards to raising a child, though he does enlist the help of Lambiase and Ismay. Maya loves living above the bookstore and spends as much time in the store with A.J. as she can. She has trusted A.J. since the moment she saw him and behaves as such. Maya says "Good morning" to every aspect of the store when she goes down in the mornings, and she watches almost all of the customers who go in and out of the store, learning them by the shoes they wear. She also takes well to Chief Lambiase who, since A.J. adopted Maya, spends most of his off-duty time at Island Books with A.J. and Maya.

Meanwhile, Amelia continues visiting Island Books once a quarter to pitch A.J. the publisher's current list. Sometimes she brings a special gift for Maya. Ismay and Daniel have a bad marriage, as Daniel cheats on Ismay openly and regularly, and Ismay feels unworthy of anything good in life, especially after she has another miscarriage that lands her in the hospital overnight. Ismay continues to spend time around A.J. and Maya, though Maya doesn't take well to Ismay. Maya does have a crush on Daniel because he's an author, and Daniel is obligatory and treats her as a niece.

Just before Maya starts Kindergarten, A.J. realizes that he has romantic feelings for Amelia after he reads her favorite book, "The Late Bloomer" and has a conversation with her on the phone that makes him nervous. He asks her out on a semi-date for the next time she comes to Alice Island, and the two go to dinner at a local seafood restaurant themed after "Moby Dick". They share a good conversation, which makes A.J. even more interested in her, but Amelia is engaged to an American soldier. The next time Amelia is supposed to come into town for Knightley's quarterly book list, she breaks her ankle and has to cancel. A.J. is desperate to see her, so he asks if they could video conference to talk about the Spring list from Knightley. During the video conference A.J. learns that Amelia is no longer engaged. He is still unsure of how he will get her attention for romance, but as he is a man not given to grand romantic gestures or expression, he broods about it before deciding that he will go visit Amelia in Rhode Island under the pretense of seeing topiary gardens for Maya.

During A.J., Maya, and Lambiase's visit to Rhode Island, A.J. and Amelia become a couple. After traveling back and forth for many months between Rhode Island and Alice Island, A.J. asks Amelia to marry him. Maya is okay with the change in family dynamics, as her and Amelia seem to get along well as friends. A.J. is happier than he's ever been, especially when he sees Maya and Amelia reading either together or near each other at the same time. Amelia moves to Alice Island, though she travels often for her job with Knightley Press.

The day of A.J. and Amelia's wedding, Ismay works up the courage to tell Daniel not only that she doesn't love him anymore, but that she knows Maya is his biological child. Ismay parks the car on the side of the road in order to finish the argument she and Daniel have started. When she does, the car is hit twice, the first time causing her leg to break and the second causing Daniel's death.

Part II fast forwards from Daniel's death to when Maya is in high school. She is taking a creative writing class because she wants to be a writer when she grows up. Her current assignment is to write about someone she wishes she knew better. A.J. and Amelia suggest her mother or her father, but Maya is stuck with writer's block. Finally, she decides to write her own version of her mother's story and she (Maya) came to be left with A.J. Maya's short story, called "A Trip to the Beach", is entered by her creative writing teacher into the county's short story contest. It is chosen as runner-up, but A.J. is still very proud of his daughter, whom he considers to be a writer.

Meanwhile, Lambiase has started his own book club called Chief's Choice Book Club, made up of himself and fellow law enforcement agents. After one of their meetings, Lambiase approaches A.J. to see if A.J. will ask Ismay if she would be interested in going on a date with him. A.J. is surprised but is willing to ask her. Ismay and Lambiase go on a date and find chemistry with one another, thus beginning a romantic relationship. After spending his first night at her house, Lambiase finds a backpack with Maya's name on the outside and A.J.'s stolen copy of "Tamerlane" on the inside. He doesn't bring up the fact that he knows about it until months later, when he knows the money from selling "Tamerlane" will help A.J.

At this time, A.J. is diagnosed with Glioblastoma multiforme, a type of cancer found on the brain. A.J. doesn't have enough money between his health insurance coverage and his savings to have the surgery that could buy him some extra time, so this is when Lambiase decides to bring up to Ismay that he knows about "Tamerlane". Ismay is thankful to Lambiase that he is kind about the discovery, but she also jumps at the chance to tell her side of the story. She explains how Marian Wallace came to visit her hoping to find Daniel so she could get some financial help for herself and Maya. Ismay admits that she was nasty to Marian Wallace, and that after finding "Tamerlane" out one evening when A.J. was passed out, she took it for Marian to sell and that could be the money she needed. Marian tried selling the book but couldn't because dealers couldn't confirm that it was a legitimate copy of the rare book, and the book ended up getting colored on by Maya during an argument between Ismay and Marian Wallace. "Tamerlane" is anonymously returned to A.J., and he uses money from the sale of it to pay for the surgery and first round of radiation.

Unfortunately, the surgery and radiation do not buy A.J. as much time as they were all hoping. The tumor neither shrunk nor grew, but its position in A.J.'s brain means that A.J.'s general capacities will slowly deteriorate. A.J.'s speech is the capacity that diminishes the fastest, and he finds he cannot speak what he would like to speak to Maya. It's at this point in the novel, shortly before the end, that the reader learns that the introduction to each chapter that is written as a book note to Maya is A.J.'s collection of life lessons from some of his favorite books. It is what he leaves as his legacy to Maya.

After A.J.'s death, Amelia puts Island Books up for sale. Lambiase and Ismay purchase the store and become the new owners of Island Books. A few years after A.J. passes away, Amelia leaves Knightley Press to be a book buyer for a large retailer in Maine. She leaves a note for Jacob Gardner, the man who takes her place at Knightley Press. In her note, Island Books is described as almost the complete opposite as it was in the note Amelia's predecessor left her years ago when she first took over the account. At the beginning, Island Books had a "fledgling" online presence, a strong literary fiction presence but a weak children's literature presence, and the owner, A.J. Fikry, bought nothing he didn't believe in. When Lambiase and Ismay purchase the store, Island Books has a strong online presence, a strong children's section, and Lambiase is described as a strong book-seller who won't take anything unless he knows it'll sell.

More summaries and resources for teaching or studying The Storied Life of A. J. Fikry.

The Storied Life of A. J. Fikry from BookRags. (c)2022 BookRags, Inc. All rights reserved.