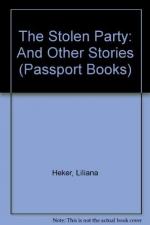 Plot Summary
+Chapters Summary and Analysis
"Georgina Requeni or The Chosen One"
“Early Beginnings or Ars Poetica"
"Family Life"
“Bishop Berkeley or Mariana of the Universe” and “Jocasta”
"The Stolen Party"
Free Quiz
Characters
Symbols and Symbolism
Settings
Themes and Motifs
Styles
Quotes
Order our The Stolen Party: And Other Stories Study Guide

The Stolen Party: And Other Stories Setting

Liliana Heker
This Study Guide consists of approximately 42 pages of chapter summaries, quotes, character analysis, themes, and more - everything you need to sharpen your knowledge of The Stolen Party.

The palace is a setting in "Georgina Requeni or The Chosen One." When Georgina is six, the President of the Republic notices her walking down the street with confidence and decides to bring her to live in his palace. The republic goes unnamed, but the palace is described as beautiful and glamorous. Georgina is given her own rooms with a balcony. There are vast fields and she is gifted several ponies. Her parents are locked in the palace's dungeons when they displease her.

The apartment is a setting in “Early Beginnings or Ars Poetica." The unnamed narrator lives on the top floor of an apartment in Argentina. This is the only time in the collection that a specific place name is given, which contrasts with the fact that this is perhaps the most nebulous and internal story of the set. The narrator constantly fears that...

More summaries and resources for teaching or studying The Stolen Party: And Other Stories.

The Stolen Party: And Other Stories from BookRags. (c)2022 BookRags, Inc. All rights reserved.