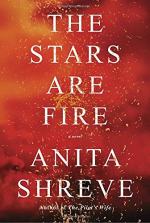 The Stars Are Fire Setting

Anita Shreve
This Study Guide consists of approximately 43 pages of chapter summaries, quotes, character analysis, themes, and more - everything you need to sharpen your knowledge of The Stars Are Fire.

Grace lives in a small house a few blocks from the ocean in Hunts Beach, Maine. She feels a deep affection for the home she has created there for her husband and two young children. However, she herself is disturbed by her compulsion to keep the rooms sparklingly clean at all times, and she often experiences claustrophobia in the tiny kitchen where she does most of her daily chores. When the home burns down, she feels as if she has lost a small part of herself and her past along with it.

In stark contrast to Grace’s home, Rosie’s neighboring home is overflowing with children’s toys and dirty dishes. “Gene once used the word squalor to describe the household,” and Grace is hard-pressed to defend her slovenly friend (8). However, Grace finds the clutter to be freeing. Rosie refuses to press...

More summaries and resources for teaching or studying The Stars Are Fire.

The Stars Are Fire from BookRags. (c)2022 BookRags, Inc. All rights reserved.