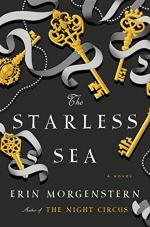 Erin Morgenstern
This Study Guide consists of approximately 48 pages of chapter summaries, quotes, character analysis, themes, and more - everything you need to sharpen your knowledge of The Starless Sea.

This detailed literature summary also contains Quotes and a Free Quiz on The Starless Sea by Erin Morgenstern.

The following version of this book was used to create this study guide: Morgenstern, Erin. The Starless Sea. Doubleday Books, 2019.

Zachary Ezra Rawlins is a graduate student at a university in Vermont. He finds a book, called Sweet Sorrows, at the university library that includes a story of him finding a door when he was a child. He researches the book and finds a connection to an annual masquerade party at the Algonquin Hotel in New York City. He goes to the party on a whim and meets a mysterious woman named Mirabel and a storyteller named Dorian. Dorian sends him a note to meet him later. When they meet, Dorian returns Sweet Sorrows to Zachary, which people have stolen from him after tracking him from the party. Dorian brings Zachary to the Collector’s Club, where this group resides, and tasks Zachary with finding a book for him. A woman tries to stop Zachary from leaving, but he escapes with Dorian. They find a painted door and Dorian pushes Zachary into it.

Zachary finds himself alone in an elevator and then enters a room, where he must roll six dice and drink an unknown liquid. He then meets the Keeper, who tells Zachary that he has reached the Harbor, which leads to the Starless Sea, and gives him a room to stay in. The next day, Zachary meets Mirabel and they decide to rescue Dorian from the Collector’s Club. They take the elevator back to New York. Mirabel orders a drink from Starbucks that comes with information: a code that she uses to enter the Collector’s Club. Inside, Dorian has been tied up and suspends from the ceiling. Someone hits Zachary on the head and he passes out. He wakes up tied to a chair. A woman named Allegra asks Zachary for information about Sweet Sorrows. She closes doors so that people cannot enter the Starless Sea. She threatens to kill Zachary’s mother if he does not comply. The lights go out and Mirabel unties Zachary. They retrieve Dorian, who is unconscious, and take him into the elevator. Mirabel shoots a lantern through the elevator so that Allegra cannot follow them.

Zachary and Mirabel do the entrance exam for the Harbor as Dorian’s proxies since he is unconscious. Zachary passes out from poison Allegra had given him and Mirabel heals him with honey. He meets an acolyte named Rhyme, who leaves behind a book called The Ballad of Simon and Eleanor. It tells the story of Eleanor and Simon falling in love and then losing each other when they pass through doors at different times. Simon searches the Starless Sea to find Eleanor. Eleanor has a baby, who becomes Mirabel. In the present day, Zachary finds a sculpture of the Queen of Bees and follows a staircase beneath it. He finds a series of notes that say a book, sword, and man are lost in time and request that he find the man. He finds Dorian and they discuss the clues. They enter a wardrobe and find themselves in a new place. After they return, Dorian confesses his feelings for Zachary. They find Allegra in the Keeper’s office. Allegra tries to shoot Dorian and then grabs him, so that they both disappear into a chasm that has formed.

The Keeper holds Zachary back. Zachary learns that the Keeper has been in love with Mirabel over her many lives. He finds a portrait that Allegra has painted 20 years ago, which shows Zachary and Dorian together. Mirabel and Zachary plan to rescue Dorian again. They get separated and Zachary finds Simon, who is the man lost in time. Meanwhile, Eleanor rescues Dorian on her ship and Allegra has died. Dorian goes to an inn, where he retrieves a box with a beating heart inside. Meanwhile, Zachary’s friend Kat has been trying to look for him since he disappeared. However, members of the Collector’s Club keep tracking her down and threatening her. Zachary finds Mirabel and tells her a story. He enters a painted door and arrives at the Starless Sea. He sees Dorian then dies. Dorian brings Zachary to Eleanor’s boat and uses the heart from the box to revive him. The Keeper and Rhyme leave the Harbor through a door as the Starless Sea floods the place. Kat receives a note to go to an abandoned library, where she sees a painting of Zachary and Dorian and one of herself. She leaves her diary in her car, where she has been documenting her investigation, and enters a door. The Keeper and Rhyme meet Mirabel in front of the library, by Kat’s car. Inside the library, a door opens to the Starless Sea’s new Harbor.

More summaries and resources for teaching or studying The Starless Sea.