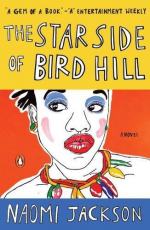 The Star Side of Bird Hill Summary & Study Guide

Jackson, Naomi
This Study Guide consists of approximately 94 pages of chapter summaries, quotes, character analysis, themes, and more - everything you need to sharpen your knowledge of The Star Side of Bird Hill.

The Star Side of Bird Hill Summary & Study Guide Description

The Star Side of Bird Hill Summary & Study Guide includes comprehensive information and analysis to help you understand the book. This study guide contains the following sections:

This detailed literature summary also contains Quotes and a Free Quiz on The Star Side of Bird Hill by Jackson, Naomi.

The following version of this book was used to create this study guide: Jackson, Naomi. The Star Side of Bird Hill. Penguin Books, 2015.

The novel begins in the summer of 1989 in the small town community of Bird Hill on the island of Barbados. Two sisters, Dionne, 16, and Phaedra, 10, have been sent to live with their grandmother, Hyacinth, on the island as a result of their mother, Avril, no longer being able to properly care for them. The girls' father, Errol, is long gone, having walked out on their family years previously, and so their grandmother is the closest person they have to a parent.

At first, both Dionne and Phaedra experience a significant amount of difficulty adjusting to their new way of life in Bird Hill. Coming from their old home in Brooklyn, New York, Bird Hill is a drastic change of pace for the sisters. As the early weeks of the summer progress, Phaedra finds herself settling into life in Bird Hill more easily than her sister. She takes an interest in her grandmother's way of living, such as her self reliance and the obeah, a special brand of Caribbean magic, she practices, as well as her family's historical ties to the Bird Hill landscape. Dionne, meanwhile, finds the monotony of life in conservatively religious Bird Hill community to be restrictive and bothersome. Unlike in New York, where she was able to lead her own life with her own responsibilities, she feels as though she has been relegated to the role of a child on the island and is not respected like the adult she believes herself to be.

Hyacinth enrolls Dionne and Phaedra in Vacation Bible School in order to keep them busy during the summer. Dionne finds herself the center of the attention of the girls in her class, who all want her opinion on clothes, makeup, and boys. Phaedra, on the other hand, is constantly picked on by the girls in her class. She eventually befriends another outcast named Donna who is the only girl that is not mean to her.

Meanwhile, details are revealed about the sisters' life in New York with their mother, who suffers from depression. Avril left Bird Hill when she was young in order to move to America with her husband, thinking that both the marriage and the move would save her from the pain she was feeling. However, life in the States only worsened her depression, especially as she became consumed by her work as a nurse to AIDS patients and found herself constantly surrounded by death. All of these factors eventually lead to the mental breakdown that sent Dionne and Phaedra to live with their grandmother.

Dionne deals with the difficulty she has adjusting to life in Barbados by acting out. She befriends a Trinidadian girl named Saranne who was sent to live with her aunt Trixie and cousin Jean, an old close friend of Avril's and an outcast in Bird Hill due to his homosexuality. Saranne proves to be a negative influence on Dionne, encouraging her to lie to her grandmother and engage in dangerous and self-destructive behavior. Partway through the summer Hyacinth receives a phone call from a hospital in New York informing her that Avril has killed herself by jumping in front of a subway train. Avril's suicide takes its toll on Hyacinth and the two girls, but the community stands by their side as they try to come to terms with this tragedy. Dionne reacts to her mother's death by continuing to act out and quickly spiraling out of control.

One day the girls' father, Errol, arrives at Hyacinth's doorstep and says he has flown in from Miami and plans to bring his daughters back to America with him. Dionne is excited at the prospect of going back to Miami with their father, but Phaedra believes it is a bad idea. Hyacinth tells Errol that he cannot take the girls away from her, and so instead he humbly pleads with her to allow him to spend the few days he has in Barbados with his daughters before he has to return to the States. Hyacinth reluctantly agrees, and Errol sets out to try to win the girls over by taking them on a trip to the beach and by offering to take them to the Crop Over festival, a huge annual celebration in Barbados. On one of the festival days, Dionne and Errol sneak away from the rest of the family and go to Errol's hotel. The next day Errol brings Dionne to the festival parade. Toward the end of the parade, Errol gets into a fight with Jean, who accuses Errol of trying to destroy what is left of Avril's life. Jean becomes badly injured, and Dionne takes him to the hospital, where she gets a ride home to Hyacinth's house.

After the incident at the parade, Dionne settles into a much more stable and less adventurous life in Bird Hill. She becomes a much more obedient granddaughter and actually tries to learn from Hyacinth rather than defy her. In the fall, Hyacinth enrolls the two girls in school. The day before school starts, Hyacinth sees a news report about Errol, stating that Miami police attempted to arrest him on charges of exploitation of minors before he drove his car off the side of the road and into the sea. With their father out of the picture and the events of the summer behind them, over time Dionne and Phaedra are able to process their mother's death and assimilate fairly well into life into their new lives in Bird Hill.

More summaries and resources for teaching or studying The Star Side of Bird Hill.

The Star Side of Bird Hill from BookRags. (c)2022 BookRags, Inc. All rights reserved.