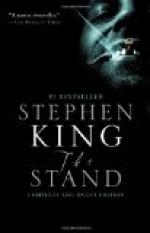 Get The Stand from Amazon.com
View the Study Pack
View the Lesson Plans
Study Guide
Order our The Stand Study Guide

This Study Guide consists of approximately 125 pages of chapter summaries, quotes, character analysis, themes, and more - everything you need to sharpen your knowledge of The Stand.

The Stand Summary & Study Guide includes comprehensive information and analysis to help you understand the book. This study guide contains the following sections:

This detailed literature summary also contains Quotes and a Free Quiz on The Stand by .

The following version of the novel was used to create this study guide: King, Stephen. The Stand. Anchor, June 24, 2008. Kindle.

The apocalyptic novel The Stand by Stephen King tells the story of a large-scale battle of good versus evil in wake of a world-wide pandemic. King begins his tale with the accidental release of the superflu, a version of the flu with a 99.4 percent mortality rate, from a military base. Those left alive were called either to Boulder, Colorado by an elderly Black woman named Mother Abigail to fight on the side of good, or were persuaded to join the evil forces led by Randall Flagg, a sort of dark wizard with the ability to shapeshift and perform black magic. The battle came to a head when Mother Abigail sent four men — Stu Redman, Larry Underwood, Glen Bateman, and Ralph Brentner — on a pilgrimage to confront Flagg in person.

Charles Campion, an employee on the Project Blue base, noticed when warning levels rose into the red zones. Even though the doors were supposed to automatically lock in those conditions, Campion was able to slip out and escape with his wife and baby. He reached Arnette, Texas before he died. Arnette was quarantined by the Centers for Disease Control, but the superflu had already spread beyond those borders.

Despite the fact that people were getting sick and dying from the flu, the military and government attempted to downplay the disaster. They took charge of the newspapers and radio stations where they allowed only military approved statements to be read or distributed. Those who attempted to tell the truth were executed. Stu, meanwhile, had been taken to the Centers for Disease Center in Atlanta because he was exposed to the virus in Arnette. Unlike the others in Arnette, Stu did not get sick. Stu was transferred to the center in Stovington when the one in Atlanta became contaminated. Fearing he would be killed because he knew too much about the virus, Stu killed a guard and escaped.

Stu and the other survivors begin having conflicting dreams. In one dream, 108-year-old Mother Abigail, a deeply religious Black woman, invited the survivors to join her in Boulder, Colorado. The dreams about Mother Abigail give the dreamer a sense of peace. Survivors also have nightmares about Randall Flagg, a representative of satan who offered the dreamer everything he wanted as long as he would bow down and worship Flagg. Flagg and his followers gathered in Las Vegas.

While Mother Abigail was gone from Boulder, Nadine joined forces with Harold Lauder, a teen boy bearing a grudge against Stu. They built a bomb according to Flagg’s instructions and planted it in the house where the committee of representative for Boulder was going to meet. On the night when the meeting was in progress, Mother Abigail returned to Boulder. When Harold detonated the bomb, most of the committee members were outside the house. For that reason, they were not killed, like Flagg hoped they would be.

Mother Abigail brought a message to the remaining committee members, that they were not there to start a government, but to overcome Flagg. She said that Stu, Larry, Glen, and Ralph were to walk to Las Vegas where they were to confront Flagg. On the way there, Stu fell and broke his leg. The other three men went on without him, as Mother Abigail had ordered.

Larry, Glen, and Ralph were arrested by Flagg’s men and brought to the lawn of the MGM Grand. Flagg intended to use them to make a statement to his people. His leadership had already begun to fall apart and people were leaving the community in Las Vegas. Whitney Horgan, one of the men who intended to leave, attempted to get the crowd to revolt by telling them what was about to happen was wrong.

Flagg created an orb of blue fire that he used to torture Whitney for his outburst. Unfortunately for Flagg, at that moment Donald Merwin “Trashcan Man” Elbert, a pyromaniac, returned from California with a live nuclear warhead. The orb ignited the warhead, resulting in a mushroom cloud that resembled a hand reaching down from heaven.

More summaries and resources for teaching or studying The Stand.

The Stand from BookRags. (c)2022 BookRags, Inc. All rights reserved.