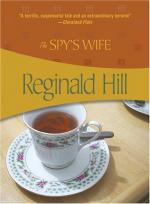 Reginald Hill
This Study Guide consists of approximately 39 pages of chapter summaries, quotes, character analysis, themes, and more - everything you need to sharpen your knowledge of The Spy's Wife.

This detailed literature summary also contains Topics for Discussion and a Free Quiz on The Spy's Wife by Reginald Hill.

The Spy's Wife by Reginald Hill is a mystery story as well as a character analysis. Molly Keatley is a comfortable, unassuming housewife whose life is turned upside with the revelation that her journalist husband Sam is, in fact, a spy for the Russian government. Set in the time of the Cold War, Molly must discover her own way to deal with the secret as well as more family troubles in order to keep her sanity and reach a place of emotional security. The Spy's Wife is an investigation into human strength amid a world of lies and suspense, written by a well respected mystery writer, someone regarded as one of the best in his genre.

Molly lives with her husband Sam, a well respected journalist, at their home in Weston Sea. They have been married for eight years and have no children, despite trying for some time. One day Sam strangely comes home in the middle of the day, and apologizes to Molly before abruptly leaving. Molly's world is then turned upside down when two detectives, Aspinall and Monk, arrive to inform her of her husband's secret life and treachery.

A flashback then takes place, giving useful information on the years of Molly's life leading up to her marriage with Sam. In her youth, Molly had been engaged to Trevor but had jilted him to come to London. Back in the present, Molly returns home to Doncaster where she was born and where her parents still live. She does not tell them of the news, and lies to Sam's boss, Iain, that Sam is ill. However, fearing for a news leak, Monk tells Iain the truth at his discretion.

In Doncaster, she is confronted with further uncomfortable details and revelations of Sam's past, including an affair, as well as having to hear the news that her mother has cancer. Causing further stress, she sees Trevor's jealous wife, Jennifer, whose presence causes tension. But Molly's parents and dog Danny aim to keep Molly happy. Feeling the need to express herself, Molly confides in Trevor, and begins an affair with him. Although the affair is quite meaningless to her, Trevor wishes to leave his wife and be with Molly again. Meanwhile, Molly is growing ever closer to Monk. Molly is forced to come face to face with Sam's mistress, Sally Anne, and each woman is equally jealous and uncomfortable in the presence of one another. A ruthless journalist named Wallace sets up the meeting and hounds Molly for news.

Sam sends Molly a flight package to Russia for her to come and see him. Wallace and Sally Anne follow her there. During the second day in Paris, Sam arrives at the hotel to talk to Molly. He gives her an explanation for everything and asks her to come and live with him in Moscow.

The next day is her last in Russia. She goes to see Sam, not knowing what her answer will be. Sam eventually turns up but is hit by a car in front of Molly, Sally Anne, and Wallace. Aspinall takes Molly back to England, and she returns to Doncaster where she gives birth to a son. It is unclear if the baby is fathered by Sam or Trevor. Molly becomes engaged to Monk, who ironically, must also move to Moscow for work.

More summaries and resources for teaching or studying The Spy's Wife.