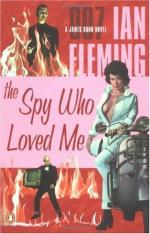 The Spy Who Loved Me Summary & Study Guide

Ian Fleming
This Study Guide consists of approximately 29 pages of chapter summaries, quotes, character analysis, themes, and more - everything you need to sharpen your knowledge of The Spy Who Loved Me.

The Spy Who Loved Me Summary & Study Guide Description

The Spy Who Loved Me Summary & Study Guide includes comprehensive information and analysis to help you understand the book. This study guide contains the following sections:

This detailed literature summary also contains Topics for Discussion and a Free Quiz on The Spy Who Loved Me by Ian Fleming.

The Spy Who Loved Me is a James Bond novel told not from Bond's point of view, but from that of a young woman he comes to help. The young woman, Viv Michel, is an intelligent young woman who has difficulty in romance and comes to America to start a new life. During her travels, Viv stops at a motel for the night and is offered a job that will help supplement her travel budget. This job is too good to be true, and ends in a standoff between two mobsters and Bond. This novel is different from many of the other Bond novels, but it is full of the same excitement and sexual tension that makes Bond a favorite for readers of all ages.

Viv Michel has difficulty in love. Two failed romances leave her looking for a change in her life. Viv, living in London since attending finishing school, decides to start over in America. Viv flies to Quebec to visit her aunt and then begins the drive from there to Florida on a sporty Vespa motor bike. The first few weeks on the road, Viv stops at every tourist attraction, excited to see all the sights. However, the attractions begin to lose their appeal and become traps, so Viv leaves the main highway and begins looking for beauty in the out-of-the-way spots along her route.

Viv arrives at the Dreamy Pines Motor Court late one evening, intending to only stay for the night. After speaking to her for some time, the couple managing the motel, the Phanceys, offer her a job. Their receptionist took off the week before and they need a girl to man the desk for the final two weeks of the season. Viv agrees to the job, thinking the money will help supplement her travel budget. The job is simple, appearing almost unnecessary to Viv, making the two weeks something of a vacation. The only downside of the situation is the Phanceys' unfortunate behaviors toward Viv.

At the end of the season, Mrs. Phancey comes to Viv and tells her that she and her husband are going to leave a day early and requests that Viv stay the last night in order to meet with the owner the following day. Viv agrees, looking forward to a little solitude. However, there is a terrible storm that frightens Viv. Viv turns on the vacancy light, hoping for a little company. Viv does not plan on the first knock being a couple of mobsters.

Viv opens the door for two men, unaware of who they are, and tells them the motel is closed. However these two men know her name and the name of the owner, and claim to be insurance men the owner has hired to inventory the motel before the owner's arrival the next day. Viv lets them in and quickly regrets her choice. The two men are clearly mobsters who have been sent for something criminal, though Viv is not sure what.

Viv tries to escape the first chance she is given, but the men chase her down and bring her back to the motel. One man gives Viv a beating and the second attempts to rape her. They are interrupted in these activities by another knock on the door. The visitor is James Bond, looking for a room after his car has suffered a flat tire. Viv tells Bond what is going on the first chance she gets and Bond promises to help her.

When everyone goes to bed that night, Bond schools Viv on how to protect herself from unwanted guests. However, Bond does not know that the mobsters have already made themselves a hidden entry into her room. Viv wakes in the middle of the night to someone jumping out of her clothes closet and is knocked on the head. When Viv wakes again she is in the woods and the motel is on fire. Bond tells her it was mobsters' plan to burn down the motel and blame it on her.

Bond goes after the mobsters. On first his first attempt, Bond is foiled and the mobsters escape However, a gun fight ensues shortly after and Bond believes he has killed both mobsters. Later that night, it turns out that one of the men is still alive. While Bond and Viv are asleep, this man attempts to shoot them in their beds. Bond kills the man. The next morning, Bond leaves before Viv wakes, but he goes to the police and makes sure Viv is well taken care of.

More summaries and resources for teaching or studying The Spy Who Loved Me.

The Spy Who Loved Me from BookRags. (c)2022 BookRags, Inc. All rights reserved.