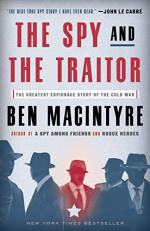 The Spy and the Traitor Summary & Study Guide

Ben Macintyre
This Study Guide consists of approximately 48 pages of chapter summaries, quotes, character analysis, themes, and more - everything you need to sharpen your knowledge of The Spy and the Traitor.

The Spy and the Traitor Summary & Study Guide Description

The Spy and the Traitor Summary & Study Guide includes comprehensive information and analysis to help you understand the book. This study guide contains the following sections:

This detailed literature summary also contains Quotes and a Free Quiz on The Spy and the Traitor by Ben Macintyre.

The following version of this book was used to create the guide: Macintyre, Ben. The Spy and the Traitor. Signal, 2019.

The influence of the KGB ran deep in Oleg Gordievsky: his father was a KGB agent, all his parents friends were KGB members, and the family lived in a KGB apartment block. Even his brother, Vasili, became a KGB spy. But for Oleg, joining the KGB was never of interest to him. Unfortunately for him, it was not a club you joined, "it chose you" (14).

By 1963, Gordievsky was officially a member. He started working for Directorate S, which was tasked with creating documentation for illegal spies. But Gordievsky was not satisfied with a desk job in Moscow - he wanted to see the world. So, knowing the KGB only sent members abroad if they were married, Gordievsky sought out a wife. He then married Yelena, whom, he admitted, had married more out of convenience rather than love.

Gordievsky's first foreign posting for the KGB was in Copenhagen. He and Yelena quickly fell in love with the vibrance and culture of the city, and the freedoms it provided. One day, out of curiosity, Gordievsky purchased a homosexual pornography magazine, something that was illegal in Russia at the time. However, Gordievsky did not know that PET and M16, the Danish and British intelligence services respectively, made note of this and labelled Gordievsky as a blackmail target.

However, what PET and M16 did not know, was that Gordievsky was already interested in spying for the West. Gordievsky was fed up with the Communist regime and wanted change, and when Richard Bromhead came asking if Gordievsky would be a spy, he agreed all too easily. Thus began years of illegal spy activity carried out between Gordievsky and M16. The groups began meeting every week to exchange documents, and Gordievsky found pleasure eroding the Soviet Union from the inside.

However later into his posting, Gordievsky met a woman by the name of Leila Aliyeva, a Russian journalist. The two quickly fell in love and Gordievsky started having an affair. He was now betraying his wife on two levels: personally and professionally.

After a couple years of successful espionage, Veronica Price of the British secret intelligence agency was introduced. Knowing full well the dangers to which Gordievsky has subjected himself, she was tasked with creating an escape plan should things ever go south for Gordievsky upon returning home to Moscow. The plan was extremely risky, and code named PIMLICO.

At the completion of his posting in 1978, Oleg and Yelena divorced, and he remarried to Leila a year later. During a spell back in Moscow, Oleg learned english, had two daughters, and eventually was posted to London at the Russian Embassy. M16 was thrilled.

Upon his return, the espionage continued without a hitch. However by the early 1980s, the tensions of the cold war were approaching an all-time high, and Gordievsky knew that the Soviets were afraid that the U.S. was going to engage in nuclear attacks. Fearing that Russia might initiate an attack, Gordievsky helped leak information to M16, who then passed it along to the CIA.

However one day, General Arkadi Guk of the Russian Embassy in London received a secret package signed "Koba." The package contained information on all of the people spying against the Soviet Union. Guk saw this as a dangle, and did not respond, but Gordievsky knew that all the information in that document came from him: there was a spy in the British Intelligence Service. They launched a formal investigation, and found John Bettany to be the mole. Since Guk was directly involved in the scenario, M16 saw it as a perfect time to expel him from the country, and have Gordievsky rise the intelligence ranks.

After continually impressing his KGB superiors, Gordievsky was told he would be promoted to the new KGB resident of Britain - the most senior position. While this was great for Gordievsky and his M16 team, as it meant all the information would be available to them, at the same time Aldrich Ames, a money hungry CIA agent, offered his espionage services to the KGB in exchange for $50,000. A few weeks after taking up his new position, Gordievsky was called back to Moscow for his official appointment to the position. However, the circumstances were fishy, and he suspected that the KGB was now aware of his espionage activities. Despite his hunch, he agreed to return, and PIMLICO was placed on high alert.

Upon his return, Gordievsky's suspicious were confirmed. His house had been bugged, and the first few days back at the Moscow headquarters were filled with suspicious activity. After a few days, Viktor Grushko called Gordievsky to a meeting at a flat with two other men. After drinking some of the booze provided, Gordievsky realized that the bottle had been poisoned with some sort of truth serum. They were trying to extract a confession, but Gordievsky held strong.

In June of 1985, Aldrich Ames supplied a list of 25 people spying against the Soviet Union. Gordievsky was one of the people on the list. Fearing what the KGB might do to him, he realized he had to fly the PIMLICO signal, and make an escape without his family if he wanted to survive. PIMLICO was activated, and Gordievsky made his way by train, bus and taxi to Kilometre Post 836 just south of Vyborg. There, he would be picked up by the M16 team, and smuggled across the border into Finland. Aside from a few scares and questionable decisions, the plan went off without a hitch.

Safe in Britain, the news broke that Gordievsky had escaped the country. The KGB was embarrassed, and refused the demand to let Gordievsky's family go. While M16 continued to negotiate for the family, Gordievsky continued to provide information to the West including the CIA. Eventually, tensions between the U.S. and Russia lessened, and the turmoil within Russia began to unfold. In 1989 the Berlin Wall was torn down, and with it, the grip of the Soviet Union. Vadim Bakatin, the new First Chief Directorate after Kryuchkov was arrested for high treason, ordered the family of Oleg Gordievsky to be released. Unfortunately, the family only lasted together until 1993. Oleg realized the marriage had nothing left, and they parted almost in unison with the completion of the Cold War.

More summaries and resources for teaching or studying The Spy and the Traitor.

The Spy and the Traitor from BookRags. (c)2022 BookRags, Inc. All rights reserved.