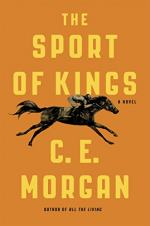 C. E. Morgan
This Study Guide consists of approximately 58 pages of chapter summaries, quotes, character analysis, themes, and more - everything you need to sharpen your knowledge of The Sport of Kings.

The Sport of Kings Summary & Study Guide includes comprehensive information and analysis to help you understand the book. This study guide contains the following sections:

This detailed literature summary also contains Quotes and a Free Quiz on The Sport of Kings by C. E. Morgan.

The following edition of this book was used to write this study guide: Morgan, C.E. The Sport of Kings. New York: Farrar, Straus and Giroux, 2016.

The first chapter of the novel, “The Strange Family of Things,” describes the upbringing of Henry Forge, a young boy whose tyrannical father, John Henry Forge, proudly runs the family’s generations-old corn farm in rural Paris, Kentucky in the middle of the 20th century. When Henry lights a firecracker under a neighbor’s cattle, killing it, John Henry ties Henry to a whipping post and whips him brutally. As Henry grows into a teenager, he becomes obsessed with horse racing, which John Henry strongly attempts to dissuade him from, believing it to be an interest of lower-class people who only fake being upper-class. As a teenager, Henry hears a rumor that the house’s black servant, Filip, has been having an affair with Lavinia, Henry’s mother and John Henry’s wife. Filip is simply never seen again, and, after John Henry sends Lavinia away for a short time, brutally rapes her on her return home. When John Henry dies in the 1960s, Henry inherits the farm and turns it into a breeding ground for racehorses.

The second chapter, “The Spirit of Lesser Animals,” describes the upbringing of Henry’s daughter, Henrietta. Henry was only married to Henrietta’s mother, Judith, for a brief time, before she ran off to Europe to be with another man. Henrietta is deeply interested in science, and is taught by Henry how to run the horse-racing operation, as he intends to leave the farm in her hands when he passes away. As Henrietta grows into a young adult, she begins to have casual sex with the farm’s many male employees, in a cold and detached manner. In 1990, a horse from the Forge farm, Seconds Flat, places second in the Kentucky Derby, but Henry is still angry with the result, as he believes a truly perfect horse would easily finish first. After this, Henrietta expands her circle of casual sex to local bars, usually asking the first man she sees to sleep with her. One day, Henrietta conducts a charged job interview with Allmon Shaughnessy, a young black man who is deeply serious, and has a quiet confidence in his abilities with horses.

The third chapter, “Nothing But a Burning Light,” describes Allmon’s extremely difficult upbringing in Cincinnati, Ohio, one of the nearest major cities to Paris, Kentucky. Allmon’s father, the white trucker Mike Shaughnessy, abandons both Allmon and Allmon’s mother, Marie Marshall. Marie and Allmon live in a shabby and dangerous apartment while Allmon goes to school, which he excels at, and Marie works as a receptionist at a dentist’s office. However, Marie develops a painful chronic illness and is frequently unable to work, and spends her days simply curled on the family’s couch, in pain. Allmon joins a local gang of drug dealers and in fact makes more money than Marie ever did, which he uses to help bring her to the doctor. However, they cannot afford the long-term care Marie needs. Marie passes away when Allmon is still in high school, and at her funeral Allmon meets a distant relative, Sophia, who is willing to take Allmon into her home in Lexington, Kentucky. However, Allmon foolishly takes Sophia’s car in an attempt to find his father in Chicago, and is quickly pulled over by the police, who discover that Allmon is carrying drugs. Allmon is then in prison for a handful of years, which are deeply traumatic for him. However, he is eventually transferred to a minimum-security prison, where he becomes adept at a horse-grooming program offered by the facility.

The fourth chapter, “The Survival Machine,” covers the brief but passionate romance that Henrietta and Allmon share, after Allmon is hired to work grooming the Forge farm’s horses. Allmon quickly becomes in charge of Hellsmouth, a horse from a distinguished lineage who Henry believes, even before the horse is born, will be a champion. As Hellsmouth grows, Henrietta and Allmon begin to passionately make love to one another in secret places around the farm, and develop an emotional bond, even though Allmon is tight-lipped about his past. At the same time, unbeknownst to Allmon, Henry is regularly having sex with Henrietta, mistakenly believing that inbreeding amongst humans will lead to the breeding of a superior human, in the same way that inbreeding amongst racehorses leads to better racehorses. When Henrietta becomes pregnant, she does not know who the father is. Henry learns of Allmon’s romance with Henrietta, and agrees to a contract with him, that he will receive a portion of Hellsmouth’s future winnings if he stops his relationship with Henrietta, and immediately begins traveling with Hellsmouth. When Henrietta gives birth, she dies due to complications in childbirth, and the baby turns out to be brown-skinned, confirming Allmon is the father.

The fifth chapter, “Hellsmouth,” describes the horse’s considerable successes during its brief racing career. While Allmon grooms the horse, the eccentric and strong-willed Mack Snyder trains the horse, while the black jockey Reuben Bedford Walker III, with a loud, idiosyncratic personality, rides the horse to victories. Despite Hellsmouth’s victories as a two-year-old, Henry is less interested in the horse and more interested in raising the child, who he has named Samuel, and not notified Allmon about. At the same time, Allmon begins to experience chronic pain, and believes he has the same disease that led to his mother’s death. After Hellsmouth sustains a broken leg, she tentatively heals going into the winter offseason under the watchful eye of all the staff, and seems to be in good shape going into the biggest race of them all in early May, the 2006 Kentucky Derby. On the morning of the Kentucky Derby, a journalist named M.J. Deane visits Henry at his farm, but Deane reveals herself to be Maryleen, who had worked in the house as a cook when Henry was a child. Maryleen tells Henry that she knows that John Henry had in fact murdered Filip all those years ago. Deane then goes to the nearby race and, finding Allmon tending to Hellsmouth in the stables, tells him the same story. Henry frantically makes his way to the race with Samuel, and intends to withdraw Hellsmouth from the running. However, he is too late, and Hellsmouth coasts to an easy and impressive victory.

The sixth and final chapter, “The Interpretation of Horses,” tells of the events that happen in the evening following the race. As Mack Snyder and Henry conduct a victorious press conference, Henry surprisingly announces that he is withdrawing Hellsmouth from all horse-racing immediately. Henry then loads up Hellsmouth into his truck and takes her back to his farm, where Hellsmouth had been born but had not seen for years. Tasked with taking Henry’s personal car back to the farm, has Allmon drives he seethes about how he is still too poor to see a doctor, that Henry is raising his own child, and now Henry’s decision to retire Hellsmouth has wiped out significant opportunities for future earnings. When Allmon arrives at the farm he quietly shoots two prized breeding horses in the head before setting Hellsmouth free. Then he walks into the unlocked Forge mansion with gasoline, pouring it all over the floors as he searches for Henry and Samuel. He orders Henry and Samuel outside and ties Henry to the same whipping post he had been tied to when he was a child. Allmon then lights the mansion on fire and kills himself with a gun. In a brief epilogue, a truck driver named John Parker picks up a mysterious and somber hitch-hiker, who resembles Allmon, and gives him a lift over to the Ohio River.

More summaries and resources for teaching or studying The Sport of Kings.

The Sport of Kings from BookRags. (c)2022 BookRags, Inc. All rights reserved.