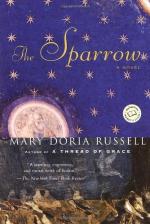 The Sparrow Summary & Study Guide includes comprehensive information and analysis to help you understand the book. This study guide contains the following sections:

This detailed literature summary also contains Topics for Discussion and a Free Quiz on The Sparrow by Mary Doria Russell.

A group of friends is brought together by the discovery of an extraterrestrial transmission from a foreign planet. The planet is called Rakhat and the find is a catalyst for exciting and tragic events that follow. Emilio Sandoz, the central character, is a priest of the Society of Jesus. After escaping a shady past of drugs and violence through priesthood, he becomes a skilled linguist. His path with the Society of Jesus leads him to cross paths with everyone who later makes up the mission crew to the planet Rakhat. The journey to Rakhat begins in Puerto Rico, Sandoz's home. An astronomer and friend of Sandoz, Jimmy Quinn, picks up on a musical radio transmission from another planet. Emilio Sandoz is the first to suggest that a mission be arranged to find the source of the alien transmission. He hopes to serve as a linguist to interpret the alien language or forms of communication. The Society of Jesus supports the idea, spiritually and financially and helps arrange the crew. Sandoz know that the skills of his friends would serve well on the trip and their fates are therefore bound together. The mission crew is made up of four priests; Emilio Sandoz, his superior D.W. Yarbrough, musician Alan Pace, and Marc Robichaux; young astronomer, Jimmy Quinn; an artificial intelligence expert, Sofia Mendes and husband and wife engineer and doctor, George and Anne Edwards.

The crew and the Jesuit Society believes the mission to be God's will and the phrase 'deus vult' meaning 'God wills it' becomes a coin phrase for the expedition. The group shares a genuine camaraderie, and the trip brings each of them to their own relationship with God and offers new perspective on life. Unfortunately, traveling to a foreign planet proves to have obstacles that no one foresees, even for a group on a mission for God. The plot unfolds through the recollection of Emilio Sandoz, after he returns from the mission alone. The Society of Jesus demands that he give a report on everything that happened but the process is more difficult than imagined. The crew meets two cultures on the planet, the Runa and the Jana'ata. The Runa befriend them immediately but the culture of the Jana'ata, the leading species on the planet, becomes their downfall. The Jana'ata society is a crude, intense, almost hedonistic version of human society on Earth and the differences cause a crucial gap in communication.

The mission gives them invaluable insight into a new planet and its culture and according to his peers marks Sandoz' transition into sainthood. However, aside from Emilio Sandoz, every member of the crew dies, some brutally. Emilio must now find a way to renew his love for God and find meaning in the existence of the Rakhat culture and the loss of his friends.