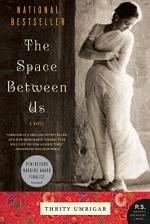 The Space Between Us Summary & Study Guide

Thrity Umrigar
This Study Guide consists of approximately 91 pages of chapter summaries, quotes, character analysis, themes, and more - everything you need to sharpen your knowledge of The Space Between Us.

The Space Between Us Summary & Study Guide Description

The Space Between Us Summary & Study Guide includes comprehensive information and analysis to help you understand the book. This study guide contains the following sections:

This detailed literature summary also contains Quotes and a Free Quiz on The Space Between Us by Thrity Umrigar.

The following version of the book was used to create this guide: Umrigar, Thrity. The Space Between Us. Harper Collins e-books, 2005.

The Space Between Us, by Thrity Umrigar, is a novel about two women in modern-day Bombay, India. One woman, Sera, is a wealthy Parsi woman whose husband has passed away. She currently lives with her daughter, Dinaz, and son-in-law, Viraf. The second is Sera’s servant, Bhima, who lives in the slums of Bombay with her granddaughter Maya. During the course of the novel, Umrigar develops the relationship between these two women using themes of poverty, domestic violence, education, and gender roles to show how these women are connected yet kept separated by societal norms.

The author writes the book alternating between Sera’s and Bhima’s perspectives, slowly revealing their histories and the story taking place in the present time.

Sera was married to a man named Feroz who fervently pursued her. Sera’s mother told her that she had heard rumors about Feroz’s mother. However, Sera believed she was marrying Feroz and not his mother, so it did not matter. Once they were married, Sera moved in to live with Feroz and his parents. Banu, his mother, was cruel. She insisted that Sera follow old rituals concerning the cleanliness of women during their period. Feroz took his mother’s side. Feroz’s father, Freddy, was a sweet man who loved classical music. He was always kind to Sera and she loved him.

When Feroz begins to abuse Sera physically and she cannot take any more of his abuse or Banu’s cruelty, she takes her daughter Dinaz and goes to stay with her parents for a few weeks. Eventually, Freddy came to speak to her. He told her he had purchased an apartment for her and Feroz to live in, so she could get away from Banu. Though living separately from Feroz’s parents spared Sera from Banu’s anger, it did not stop Feroz from beating her. When he eventually died, Sera felt both sadness at the loss of a man who had loved her and relief that the abuse ended. A few months after Feroz died, Dinaz and Viraf moved in with her. She has been happier in the three years since Feroz died than she has ever been.

Bhima had been married to a man named Gopal. She loved him, and they had a good marriage until he suffered an accident at work. Bhima and Gopal were living in a nice apartment with their children, Pooja and Amit. Gopal worked in a factory. One day a man came to the door and told Bhima that her husband was injured. He needed her to come to the hospital where he was being treated. On the way, he tricked Bhima into putting her thumbprint on a document that signed away Gopal’s rights to a settlement. Because Bhima could not read, the man told her the document she was signing was to give permission for his care.

After recovering from his injury, Gopal learned he no longer had a job to return to and that he was entitled to only a paltry sum of money. He began drinking. Bhima and Pooja worked to provide money for Amit’s education. One day, Bhima went to the bar where Gopal was drinking away money meant for medicine for Amit. She hit him with a broom in front of the other men. Humiliated, Gopal took Amit and left Bombay, leaving Pooja and Bhima behind. When Bhima’s money ran out, she and Pooja were forced to move to the slums.

Pooja eventually married and moved to Delhi with her husband. A few years later, Bhima received a letter saying that Pooja was very ill. She went to Delhi and discovered that both Pooja and her husband were dying of AIDS. After they died, Bhima brought Maya home to live with her.

In the present-day story, Maya is a teenager. She has been attending college, which Sera has been paying for. She is back home with Bhima now because she has gotten pregnant. She refuses to tell her grandmother the father’s name. Bhima’s worry for Maya has been affecting her work as Sera’s servant. She has been late on a few occasions and is forgetful. Still, Sera cares about her, so she does not reprimand the older woman even though others believe she is too kind to a servant who should be kept in her place.

Bhima and Sera decide that Maya must have an abortion so that she can eventually go back to college. Bhima knows that the only way Maya can escape being a servant like her is to get an education. Dinaz asks Viraf to help the women find a doctor to perform Maya’s abortion. He readily agrees to help. Meanwhile, Maya grows angry and sullen. She refuses to see Sera and avoids Dinaz and Viraf. However, when she learns that she will have an abortion, she insists that Sera be the one to go to the hospital with her.

After the abortion, Maya is depressed for months. Finally, Bhima is able to convince her to go for a walk at the seaside with her. This becomes a nightly ritual for them and Maya shows improvement. One night at the seaside, Dinaz calls out to Bhima and Maya. She, Viraf, and Sera had been dining when they noticed the two. While Bhima and Dinaz talk, Bhima notices that Viraf suddenly seems very nervous. She realizes by his behavior and Maya’s that he was the father of Maya’s baby.

Bhima initially blames Maya for sleeping with Sera’s son-in-law after everything Sera has done for them. Maya reveals that Viraf raped her while she was working at Banu’s house. The news incenses Bhima. She does not want to hurt Sera, but she knows she must confront Viraf. When Viraf next drives her to the marketplace, she tells him what she knows. She thinks her knowledge of his behavior will keep him from doing such a thing again. She does not tell Sera about the rape.

Weeks later, Viraf tells Sera that there is money missing from Banu’s cupboard. He accuses Bhima of taking it because she had been at Banu’s the last time he saw it. Bhima tells Sera she did not take it. When Viraf presses the issue, Bhima tells Sera what he did to Maya. Sera says she could have forgiven Bhima for stealing, but she cannot forgive her for trying to ruin her son-in-law’s reputation. She fires Bhima.

Bhima takes her belongings and walks toward home. While she thinks about all that has happened, she wanders toward the seaside. There she thinks about an Afghani man who had sold balloons on the beach when she and Gopal were first married. He had always seemed lonely, but she believed he held the key to living with loneliness. She also admired the risk he had taken by leaving his homeland and striking out on his own. She decides to honor his memory by purchasing some balloons. As she walks toward the ocean with them, she begins to feel a sense of freedom. She releases the balloons and knows that tomorrow is another day, and she will deal with it when it comes.

More summaries and resources for teaching or studying The Space Between Us.

The Space Between Us from BookRags. (c)2022 BookRags, Inc. All rights reserved.