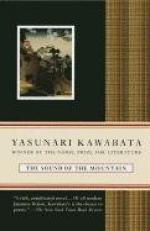 Plot Summary
+Chapters Summary and Analysis
The Sound of the Mountain and The Wings of the Locust
A Blaze of Clouds, The Chestnuts, and A Dream of Islands
The Cherry in the Winter, Water in the Morning, and The Voice in the Night
The Bell in Spring, The Kite's House, and A Garden in the Capital
The Scar, In the Rain, and The Cluster of Mosquitoes
The Snake's Egg and Fish in Autumn
Free Quiz
Characters
Objects/Places
Themes
Style
Quotes
Topics for Discussion
Order our The Sound of the Mountain Study Guide

The Sound of the Mountain Summary & Study Guide

Yasunari Kawabata
This Study Guide consists of approximately 26 pages of chapter summaries, quotes, character analysis, themes, and more - everything you need to sharpen your knowledge of The Sound of the Mountain.

The Sound of the Mountain Summary & Study Guide Description

The Sound of the Mountain Summary & Study Guide includes comprehensive information and analysis to help you understand the book. This study guide contains the following sections:

This detailed literature summary also contains Topics for Discussion and a Free Quiz on The Sound of the Mountain by Yasunari Kawabata.

The Sound of the Mountain is a novel by Nobel Prize winning writer Yasunari Kawabata. In this novel, Ogata Shingo is a man in his sixties who is beginning to feel the edge of his mortality. Shingo becomes obsessed with his memories and the legacy he will leave behind when he dies. While consumed with memories of the sister of his wife, a woman with whom he was once madly in love, Shingo finds himself growing closer to the young woman who is his son's wife. A complicated situation emerges, causing Shingo to question his own actions in regards to the disaster that has become of both his children's marriages. The Sound of the Mountain is a novel of mortality and the legacy each living being leaves behind upon his death.

Shingo is aware that his mind is beginning to go. Often Shingo becomes aware that his son and his secretary have to subtly remind him of things that he needs to do at work or help him find items he has left in some place he cannot recall. Age has sneaked up on Shingo and it often causes him to think back on his life and to recall the people of his past. Shingo finds himself thinking often of his wife's sister, a woman he once loved deeply who died at too young an age. Despite more than thirty years of marriage, Shingo finds himself still wishing he had been lucky enough to marry the other sister.

Shingo has also become aware that his son is unfaithful to his wife. Kikuko is a beautiful young woman who reminds him of the sister he once adored. The way his own son treats such a young, engaging young woman makes Shingo feel himself a failure when it comes to his children. For this reason, Shingo asks his secretary, Eiko, about his son's mistress. Over time Eiko tells Shingo about the woman, even taking him to see the house where she lives. Shingo, however, afraid of interfering too much, does not see the woman.

One morning, Kikuko gets a letter from a friend who has had an abortion and is having complications. Shingo goes with her to the hospital, aware that she must pass the section of town where her husband's mistress lives. Later, Shingo learns that Kikuko has traveled into Tokyo again to have a medical exam. A conversation with his son the following day allows Shingo to learn that Kikuko has had an abortion because she does not want to have a child with his son as long as he has a mistress. To add insult to injury, Shingo learns that his son asked his mistress to pay for the abortion.

A few days after her abortion, Kikuko goes into Tokyo to stay with her family for a few days. Shingo calls to check on her and finds her in much better spirits. In fact, Kikuko insists on meeting with him in a park where he is impressed with her high color and apparent happiness. Kikuko comes back to the family home the following day.

Not long after Kikuko's abortion, Shingo learns from Eiko that his son's mistress is pregnant. Shingo goes to see the mistress and learns that she is determined to have the child despite the insistence of Shingo's son that she not have it. The woman then claims that the child is not his. Shingo pays her money and tries to believe the child is not his grandchild, but he finds it impossible to convince himself of such a thing.

At home, Kikuko expresses a desire to separate from her husband and become a full servant to Shingo. Shingo is startled by this, seeing it as a first declaration of love. Shingo tells her that she should not think that way and that she is a free woman, free to do as she pleases. This seems to satisfy her. That night, Shingo's daughter, who is now divorced from her drug addicted husband, asks him to buy her a shop where she and Kikuko might make a living together.

More summaries and resources for teaching or studying The Sound of the Mountain.

The Sound of the Mountain from BookRags. (c)2022 BookRags, Inc. All rights reserved.