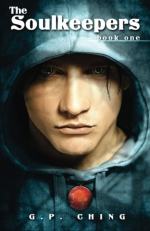 G. P. Ching
This Study Guide consists of approximately 60 pages of chapter summaries, quotes, character analysis, themes, and more - everything you need to sharpen your knowledge of The Soulkeepers.

The Soulkeepers Summary & Study Guide includes comprehensive information and analysis to help you understand the book. This study guide contains the following sections:

This detailed literature summary also contains Quotes and a Free Quiz on The Soulkeepers by G. P. Ching.

The following version of the book was used to create this study guide: Ching, G.P. The Soulkeepers (The Soulkeepers Series). Darkside Publishing, 2011. Kindle AZW file.

Jacob Lau wakes after a car accident to discover that his mother is missing and that he cannot remember what really happened in the moments leading up to the wreck. His memories seem impossible, and Jacob attributes them down to a head injury and the general chaos caused by the accident. His father died years earlier and his mother's disappearance means Jacob must move from Hawaii to Paris, Illinois, to live with an uncle he did not even know existed. Uncle John and Aunt Carolyn have one daughter, Katrina. While John tries to make Jacob feel at home, Carolyn and Katrina make it clear they see Jacob as an unwelcome intrusion. Katrina soon leaves home for college and has little time for her mother, which softens Carolyn's attitude toward Jacob.

Jacob feels out of place and cannot make friends. He is worried about his mother and feels helpless in the search for her. When Katrina picks a fight, Jacob's anger reaches a boiling point and he smashes up several dolls from her antique collection. He smashes the head of one of the dolls into a neighbor's window. As punishment, John makes Jacob work off the cost of the dolls and has Jacob begin working for Dr. Silva, the neighbor, to pay for the window he broke. Jacob soon feels something is strange about Dr. Silva, but he also feels that there is something strange about himself.

Jacob makes friends with a girl named Malini, who is also a recent transfer to Paris High School. One day, Jacob defends himself against a school bully by apparently attacking the boy with water. Jacob continues to insist there is nothing strange about what happened until he simply has to admit that he has the ability to control water. He can manipulate it to do almost anything he wants.

Jacob discovers that Dr. Silva's garden is magical. A tree at the center of the garden has literally grown from the body of Dr. Silva's husband, Oswald. The tree is a portal that allows Dr. Silva and others to travel to any location around the world at specific times. Jacob tries to force Malini to travel through the portal with him, but she fears the effects. Their argument puts a temporary halt to their relationship, with Malini's anger centered around the fact that Jacob had not been honest with her about his plan and his power. Later, she has to admit that she has not been entirely honest with him either, which prompts her to forgive him. Malini's power is not fully defined, but it is clear that she has some supernatural abilities that seem to be related to her belief in God.

A new girl, Aurial, begins spending time with Jacob, but Malini immediately recognizes the evil in the girl. She is a fallen angel. She kidnaps Jacob, taking him to Nod where the fallen angels treat humans as slaves or curiosities. Jacob is placed in a zoo where he discovers his mother in another cage. Malini and Dr. Silva rescue him, and even manage to take Jacob's mother with them. When they return to Paris, Dr. Silva agrees to resume her training with Jacob. Lily reveals that she is also a member of the Soulkeepers and that she had been struggling to deal with her abilities when she was captured. They settle into a new life, living with John and Carolyn. They pledge to hone their skills for future missions.

More summaries and resources for teaching or studying The Soulkeepers.

The Soulkeepers from BookRags. (c)2022 BookRags, Inc. All rights reserved.