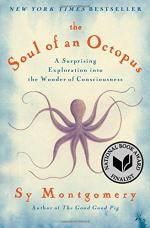 Summary
+Chapters Summary and Analysis
Athena - Encountering the Mind of a Mollusk
Octavia - This Shouldn't Be Happening: Tasting Pain, Seeing Dreams
Kali - The Fellowship of the Fishes
Eggs - Beginning, Ending, and Shape-Shifting
Transformation - The Art of Breathing in the Ocean
Exit - Freedom, Desire, and Escape
Karma - Choice, Destiny, and Love
Consciousness - To Think, to Feel, to Know
Important People
Objects/Places
Themes
Styles
Quotes
Topics for Discussion
Order our The Soul of an Octopus Study Guide

The Soul of an Octopus Summary & Study Guide

Sy Montgomery
This Study Guide consists of approximately 47 pages of chapter summaries, quotes, character analysis, themes, and more - everything you need to sharpen your knowledge of The Soul of an Octopus.

The Soul of an Octopus Summary & Study Guide Description

The Soul of an Octopus Summary & Study Guide includes comprehensive information and analysis to help you understand the book. This study guide contains the following sections:

This detailed literature summary also contains Topics for Discussion on The Soul of an Octopus by Sy Montgomery.

The following version of this book was used to create the guide: Montgomery, Sy. The Soul of an Octopus. Simon & Schuster, 2015.

Sy Montgomery is seized by her curiosity of octopuses, and travels to the New England Aquarium to meet one. She is enthralled by Athena who wraps her tentacles around her arms, like an alien's kiss. Athena trusts her immediately, bearing her head to Montgomery, and the author envisions her as a portal to a new way of thinking. She returns another day, continually learning about the species and feeding Athena. The cephalopod passes fish down its arms from sucker to sucker, like a conveyor belt. Completely unexpected, Athena dies a few months later.

A baby octopus, Octavia, is delivered so Wilson and Sy try to get to know her. She is very shy at first, but eventually embraces them and accepts their food. Montgomery hears many great mollusk stories from staff and volunteers of the aquarium. For example, Alexa Warburton was conducting research on the creatures, and they would run around the room on their tentacles after escaping their tanks and hide under furniture. Some even used the catching net as a trampoline. Montgomery forms a close relationship with Octavia and finds out more about octopuses' intelligence and sensory capabilities. Octavia shows signs of becoming senile so the aquarium gets a new octopus.

The baby is named Kali, like the Hindu goddess of creation and destruction. She is kept in a pickle barrel, because octopuses should not be put in the same tank and are prone to escaping. The aquarists and volunteers have "cephaloparties" where they all gather around Kali's tank to play with her. In this setting, they get to know each other quickly as they feel very comfortable. Montgomery learns that two women named Marion taught the aquarists how to handle octopuses and anacondas with their hands - they had been too scared to do so before.

Octavia has laid eggs and retreated to her den, guarding them every single moment of the day. Some octopuses will not eat for years in order to stay with their eggs. They are not fertilized, however, so they will never hatch. Kali is growing bigger and stronger, even biting Anna one day. So the team worries that she is interacting with too many people and needs to be in a bigger tank. Montgomery comes in early in the morning to watch Octavia through the glass before the visitors arrive, she is often sleeping and cleans her eggs when she wakes up. Great Pacifics usually die soon after laying eggs, but Octavia continues for a surprisingly long time.

Montgomery wants to learn how to dive so she can see the underwater world and truly adopt an octopus' perspective on life. She is unable to finish her course because her ears are too sensitive to the pressure. Christa, another volunteer, encourages her to try again. With her new instructor, "Big D," who is of a similar age she gets her open water certificate and heads to Cozumel, Mexico for her first look at the ocean. She sees several octopuses and is completely stunned by the incredible colors, shapes, and species under the sea.

Octavia is still going strong, which delights Montgomery but creates a major issue of where to keep Kali. Montgomery continues her octopus research; her philosopher friend, Peter Godfrey-Smith, theorizes that octopuses may not have a sense of self in the way that humans do because their neurons are spread over all their tentacles. Because their brain is not centralized, they might have a different kind of identity. The team tries moving Kali to a bigger tank, but she escapes during the night. Even though the hole was less than three square inches big, Kali managed to escape and dried out on the floor.

Bill feels incredibly guilty the next day. Sy goes to the airport with some staff members to pick up a new octopus. She is very small, feisty, and active. The supplier, from British Columbia, does not feel bad about taking the creatures from the wild because he feels they are ambassadors, promoting the needs of octopuses to humans. They name her Karma. Montgomery attends the Octopus Blind Date on Valentine's Day in Seattle. The two creatures float, embracing in the water for hours. They change color throughout, sometimes completely white, sometimes bright red, dark, or patterned. The viewers who stay for hours are deeply touched and one of their most devoted visitors decides to paint them.

Montgomery goes on her second diving trip, to Mooréa in the South Pacific. She is helping to conduct research to assess the behavioral patterns of octopuses, especially whether they have personalities. She learns how to free dive, and witnesses a beautiful scene of sharks haloed by light with her underwater photographer friend Keith. Before her vacation, many animals gave birth at the aquarium, including an endangered species - the Lake Victoria cichlid. Octavia and Karma are switched in their homes after much deliberation. Karma is very happy to be able to spread out and entertains the visiting crowds. Octavia is happy to live simply in her old age, and Montgomery concludes with her feelings of gratitude for all she learned from the octopuses.

More summaries and resources for teaching or studying The Soul of an Octopus.

The Soul of an Octopus from BookRags. (c)2022 BookRags, Inc. All rights reserved.