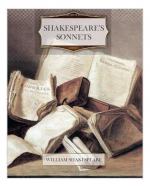 The Sonnets Topics for Discussion

What explains the occasional use of "he" and "him" as love objects in several of these poems?

Does it appear that Shakespeare intended these sonnets to be published, or did he write them for strictly personal circulation?

Name five objects to which Shakespeare compares his love.

What is the character flaw in his beloved to which Shakespeare alludes several times in the sonnets?

Would footnotes for some archaic words be helpful, or is it possible to decipher the sixteenth century English from context?

How does Shakespeare's attitude toward his lover change throughout the course of these sonnets?

Who does the poet name as his muse?

Does it appear from the sonnets that the poet is older than his lover?

What quality of his beloved tends to obscure her defects?

What is the one thing Shakespeare most wants from his beloved, in the earlier sonnets?