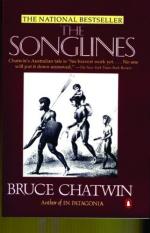 The Songlines Topics for Discussion

Bruce Chatwin
This Study Guide consists of approximately 29 pages of chapter summaries, quotes, character analysis, themes, and more - everything you need to sharpen your knowledge of The Songlines.

Do you agree with Chatwin's hypothesis that mankind is restless and wandering by nature? What evidence from literature or your own experiences leads you to agree or disagree?

What are the social ills that would be avoided if man had remained or became again nomadic? In what ways could Aboriginal law inform such a world?

Based on your reading of the book, what do you think Chatwin's ideal world would look like? What would be its values? Who would be its leaders?

Chatwin points out that monotheism came to the world by way of nomadic cultures. How do you think one relates to the other? As highly as Chatwin regards the nomadic lifestyle, do you think he sees that particular offering as a benefit to the world at large or not? Explain.

There is a section in Chapter Thirty in which Chatwin cites several...

More summaries and resources for teaching or studying The Songlines.

The Songlines from BookRags. (c)2023 BookRags, Inc. All rights reserved.