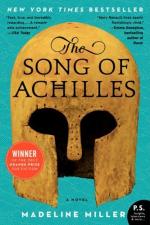 The Song of Achilles: A Novel - Chapters 1-4 Summary & Analysis

Patroclus remembers being a young child with his father the king and his mother, who is referred to as simple. Patroclus was also deemed simple, though not quite as severe as his mother. At five years old, he was at the games with his father, watching the runner and holding onto the wreath of leaves for the eventual winner. Patroclus also remembers skipping stones for his mother at the Aegean Sea.

When he is nine years old, Patroclus is brought by his father to woo Helen, the daughter of the king of Sparta. Patroclus is the least impressive suitor, as the others are much older and many descend from Gods.

Odysseus advises Helen's father that suitors will wage war with him when they are rejected. He proposes that Helen choose instead, and that all suitors must vow to protect...

The Song of Achilles: A Novel from BookRags. (c)2022 BookRags, Inc. All rights reserved.