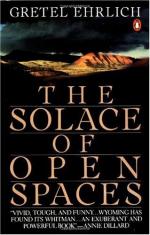 Gretel Ehrlich
This Study Guide consists of approximately 24 pages of chapter summaries, quotes, character analysis, themes, and more - everything you need to sharpen your knowledge of The Solace of Open Spaces.

The Solace of Open Spaces Summary & Study Guide includes comprehensive information and analysis to help you understand the book. This study guide contains the following sections:

This detailed literature summary also contains Topics for Discussion and a Free Quiz on The Solace of Open Spaces by Gretel Ehrlich.

The Solace of Open Spaces by Gretel Ehrlich is a work of non-fiction. The book was written over a period of five years, from 1979-1984. According to the author, the book actually began as a series of rough-edged journal entries sent by Ehrlich to a friend in Hawaii. It was written in "fits and starts" as many journal entries are. The intent when turning it into a book was to write a complete narrative in chronological order. After the text was written, Ehrlich created a flow in the work, although it is clear that the work is a sort of mosaic rather than a single painting.

Ehrlich grew up in Santa Barbara, California, an academic, who decided to give it up for the open spaces of Wyoming. The original reason for the trip was for Ehrlich, who was a filmmaker in addition to being a writer, to film a documentary for Public Broadcasting. The documentary was designed to focus on sheep herders and their lives throughout the high months of the year, which are June through September.

In 1976, Ehrlich traveled from her native California to Wyoming to start shooting the footage for the documentary. Shortly before Ehrlich set off to meet with the sheepherders in Lovell, she learned that her lover, David, was dying. Despite David's worsening condition, Ehrlich went ahead with the film project. David lasted throughout the project but died shortly thereafter.

While in Wyoming, Ehrlich fell in love with the wilderness of the state, its primitiveness, and wide open spaces. As a result of this transformation and her introduction to the world of ranch life, Ehrlich began to write The Solace of Open Spaces in 1979. Over the next five years, Ehrlich would record her experiences as a ranch hand and herder as well as a friend to others in the same occupation. Those experiences are what Ehrlich used to draw upon for the book, which was completed in 1985.

While in Wyoming, Ehrlich tried her hand at many things from lambing to calving, branding, and herding animals across thousands of miles. Part of the reason for the stay in Wyoming was for the author to lose herself in the wide open spaces. However, the exact opposite occurred and Ehrlich found her true self in spite of her efforts.

Along with a great deal of information and insight on the lives of ranchers, herders, cowboys and their beliefs and work ethic, Ehrlich also shares many tales of her relationships with these people. Many are humorous and show how people of a certain region have their own way of doing everything just slightly differently than everybody else from the language to the way they regard one another. In Wyoming, everyone knows everyone and there is a strict Western code to be followed. Ranchers are courteous and kind, hardworking, tough and yet gentle. The demanding and difficult weather and terrain make a unique type of society where people are often isolated for many months of the year. One woman in the book hadn't left the ranch in 11 years. That type of isolation causes a lot of strange behavior, from the violent to the apparently crazy. No matter what a person's attitude, however, he or she is accepted.

Ehrlich left Wyoming to travel but always returned, much to the relief of friends such as John the sheepman, who has been by the author's side since her arrival in the area. After getting married, Ehrlich and her husband settled in Shell, Wyoming. Ehrlich continued to help out when needed, whether it was for herding or any other duty. Ehrlich and her husband also operated their own ranch.

More summaries and resources for teaching or studying The Solace of Open Spaces.

The Solace of Open Spaces from BookRags. (c)2022 BookRags, Inc. All rights reserved.