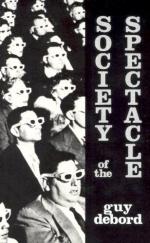 The Society of the Spectacle Summary & Study Guide

Guy Debord
This Study Guide consists of approximately 34 pages of chapter summaries, quotes, character analysis, themes, and more - everything you need to sharpen your knowledge of The Society of the Spectacle.

The Society of the Spectacle Summary & Study Guide Description

The Society of the Spectacle Summary & Study Guide includes comprehensive information and analysis to help you understand the book. This study guide contains the following sections:

This detailed literature summary also contains Topics for Discussion and a Free Quiz on The Society of the Spectacle by Guy Debord.

The Society of the Spectacle is a philosophical text presented in nine chapters and 221short theses. Each thesis is brief—about a paragraph in length. The text presents an extensive reinterpretation of the philosophy of Marx, with particular focus on commodity fetishism and contemporary mass media. The work of Lukács is central to many theses, as is the philosophy of Hegel. In addition, the text expands Marx's notion of alienation well beyond labor. Debord directly addresses Soviet and American societies in the work.

The text is divided into nine named and enumerated chapters, each of which presents a basic theory and develops it with supporting matter and interpretation. The author presupposes a highly educated reader and throughout the text a plethora of references and insinuated references are discovered. The meaning of the text will change with the reader's familiarity with the various philosophies connected to the text. In general, a reader must be familiar with Marx and Hegel to make much sense of large portions of the text, particularly Chapter 4. Other sections are less dependent upon external references and much can be gained by a study of them, such as in Chapter 1, independent of other sources.

Debord suggests that modern society has undergone a significant and unique development since around the time of mass industrialization. People have moved away from the existence of necessity and toward an existence of surplus. As modern production has enabled the mass accumulation of capital, so it has changed the fundamental nature of the experience of living. Although this shift could have occurred in several ways, it did occur through a capitalist mechanism that has drawn upon several preexisting paradigms for support, notably Christianity. The result is Debord's society of the spectacle where, first, the condition of being is replaced by the condition of having; and, second, the condition of having is replaced by the appearance of having. In other words, modern production has enabled a surplus of the necessities of life so great that most people never face the reality of, e.g., starvation. In the early stages of the spectacle, massive amounts of capital are stockpiled—being is replaced by having. In the later stages of the spectacle, amassed capital becomes so immense that it is valueless within the system—having is replaced by the appearance of having.

More summaries and resources for teaching or studying The Society of the Spectacle.

The Society of the Spectacle from BookRags. (c)2022 BookRags, Inc. All rights reserved.