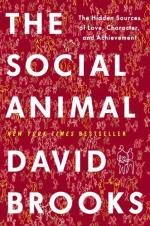 David H. M. Brooks
This Study Guide consists of approximately 30 pages of chapter summaries, quotes, character analysis, themes, and more - everything you need to sharpen your knowledge of The Social Animal.

The Social Animal: The Hidden Sources of Love, Character, and Achievement Summary & Study Guide includes comprehensive information and analysis to help you understand the book. This study guide contains the following sections:

This detailed literature summary also contains Topics for Discussion and a Free Quiz on The Social Animal: The Hidden Sources of Love, Character, and Achievement by David H. M. Brooks.

The Social Animal: The Hidden Sources of Love, Character, and Achievement by David Brooks is mainly the story about Harold and Erica. Brooks borrows the methods of Rousseau by taking the principals and applying them through storytelling. Brooks has created two main characters - Erica and Harold.

Brooks begins by telling what he believes will be the happiest story the reader has ever read. It is a story about two seemingly ordinary people that have done extraordinary things. These people were never singled out as geniuses or spectacularly special in any way. Instead, their gifts seemed to be innate and less obvious than the gifts of some overachievers or star athletes. This couple possessed noncognitive skills - skills that are not obvious. The term is a catchall phrase for things that are not easily measured. Brooks states that this book is different from the zillions of others that have been published over the years. It focuses on the role of the inner mind and the birthplace of street smarts. Brooks asserts that the majority of thinking - thinking that leads to success - takes place in the unconscious mind. "If the study of the conscious mind highlights the importance of reason and analysis, study of the unconscious mind highlights the importance of passions and perception. If the outer mind highlights the power of the individual, the inner mind highlights the power of relationships and the invisible bonds between people." Introduction, p. 8.

Harold and Erica have been created to show every aspect of the social animal including education, socialization, and morality. They have ups and downs and hard learning experiences. Throughout it all, however, both learn how to adapt and grow as individuals as well as a couple. Both achieve greatness in their chosen fields by emulating the principles set forth by the author.

More summaries and resources for teaching or studying The Social Animal: The Hidden Sources of Love, Character, and Achievement.

The Social Animal: The Hidden Sources of Love, Character, and Achievement from BookRags. (c)2022 BookRags, Inc. All rights reserved.