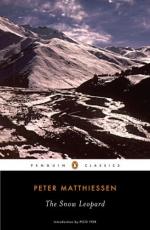 Peter Matthiessen
This Study Guide consists of approximately 27 pages of chapter summaries, quotes, character analysis, themes, and more - everything you need to sharpen your knowledge of The Snow Leopard.

This detailed literature summary also contains Topics for Discussion and a Free Quiz on The Snow Leopard by Peter Matthiessen.

"Snow Leopard" by Peter Matthiessen is a non-fiction book detailing the author's trip into the Himalayas to search for the elusive and mystical mountain cat known as the snow leopard.

The author's journey is both personal and professional, as a group of porters and sherpas joins the author and the preeminent field biologist Dr. George Schaller on a trek through the Himalayas and the Tibetan plateau in search of the snow leopard. In addition to the snow leopard, Matthiessen and Schaller intend to obtain and record data on the Himalayan bharal, a rare blue sheep that is a cross between a traditional sheep and a goat. The animal lives high in the mountains, and little is known about its mating rituals and social habits. The bharal is almost an obsessive subject with Schaller, who arranged the trip with the recording of the bharal's behavior as one of the main objectives. The other main objective, although one that is less likely to be attained, is the search for the snow leopard, an elusive and almost mystical mountain cat. Schaller is one of the only two westerners who have seen the snow leopard in its natural habit, twenty-five years earlier.

The snow leopard is known for being cagey and being able to camouflage itself in the deep white snows of the region. There are supposedly only six leopards on the Nepal side of the Himalayas, making the objective to capture one on film very unlikely. Still, the expedition is willing to try, facing a great deal of bitter and harsh weather including snowstorms, monsoon rains, the serious illness of one of the porters, and treacherous conditions.

Schaller and Matthiessen succeed in seeing several herds of bharal at the beginning of the rutting season. Schaller is ecstatic at the turn of events and obsessively records all he can regarding the animal's mating and social habits, of which little is known throughout the western scientific community.

The book gives detailed insight into the conditions of the Himalayas from the rugged terrain to the unpredictable weather. The group encounters a number of people, mostly Nepalese, as they journey over the mountains beginning at Kathmandu and ending in Jumla.

Matthiessen, as a devout Zen Buddhist and also sees the trip as one of personal and religious enlightenment. The author is struggling with grief from his wife's sudden death from cancer the previous year. The couple had a tumultuous relationship that ended in a complete commitment shortly before she died. Matthiessen thinks of his wife and four children a great deal, although he does not cloud the relationships with unrealistic images.

In the end, Matthiessen and Schaller part company, with Schaller remaining on Crystal Mountain even though the weather conditions are increasingly unpredictable. Matthiessen returns to Kathmandu where he receives communication from Schaller detailing an encounter with a snow leopard.

More summaries and resources for teaching or studying The Snow Leopard.