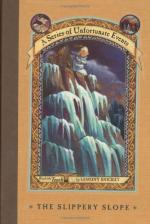 Klaus is the middle child of the three Baudelaire siblings, whose parents are believed to have died in a house fire leaving them a large fortune. Since the death of his parents, Klaus and his siblings have undertaken a series of adventures in an attempt to solve the mystery of their parents' death.

Klaus is a very intelligent boy who has read widely and has a wealth of knowledge about literature, science and other subjects. In cooperation with his older sister, Violet, he is often able to solve complicated puzzles and escape seemingly impossible situations. In this story, Klaus puts his intelligence to work deciphering a code left by the VFD giving the time of their planned meeting at the Hotel Denouement. His knowledge of Russian literature allows him to help solve a puzzle lock that gives him access to the VFD headquarters.