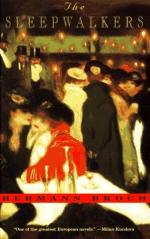 Hermann Broch
This Study Guide consists of approximately 44 pages of chapter summaries, quotes, character analysis, themes, and more - everything you need to sharpen your knowledge of The Sleepwalkers.

The Sleepwalkers Summary & Study Guide includes comprehensive information and analysis to help you understand the book. This study guide contains the following sections:

This detailed literature summary also contains Topics for Discussion and a Free Quiz on The Sleepwalkers by Hermann Broch.

The Sleepwalkers, by Hermann Broch, is a story about several men who lived in pre-World War I Germany, whose fates brought them to a small German town at the end of World War I, and how their lives were forever changed from what happened to them there.

Joachim Von Pasenow is a young man from an aristocratic family, who has been chosen by his father to have a military career. His brother, Helmuth, will be trained to take over the management of the family estate. Joachim is stationed in Berlin, and meets two people who make a huge impact on him. The first is a fellow military officer named Eduard Von Bertrand, who quits the military to become a broker. The other is Ruzena, a Bohemian prostitute with whom Joachim falls in love.

When Helmuth is killed in a duel, Joachim is required to come home for a lengthy period of time, and Ruzena goes back to being a prostitute. Joachim marries Elisabeth, a woman from his own socio-economic level, and eventually takes over management of the family estate.

August Esch is a spirited man who is a bookkeeper. He is wrongfully terminated from his position in a Cologne warehouse, and finds employment in Mannheim. He moves to the new town, but stays in touch with his friends from Cologne: Martin, a labor organizer, and Frau Hentjen, an older woman who owns a restaurant. When Esch takes a job as a bookkeeper for Bertrand's company, he begins to hear rumors about Bertrand being a sodomist, and this greatly disturbs Esch. Esch boards at a house with a man named Korn and his old maid sister Erna. Esch takes them both to a theater one night, and Esch is fascinated with the acts. Esch goes to the theater the next day and becomes friends with the managers. One night Martin is in Mannheim and asks Esch to attend a meeting. At the meeting, Martin is arrested for being a socialist, and Esch blames Bertrand for this. Esch quits working for Bertrand and begins promoting wrestling matches for the theater, but all the while he is figuring out a way to make Bertrand pay for Martin's imprisonment.

Finally, Esch travels to see Bertrand and tells him he must tell the police what he knows about Bertrand. Bertrand treats Esch well, gives him dinner, shows him around the estate, and sends him on his way. The next day, Bertrand commits suicide.

Esch decides that the accounts are now balanced, and decides to marry Frau Hentjen. Esch ends his various affairs and stops working for the theater.

Many years later, World War I is winding down and Germany is being defeated. Joachim and Esch wind up in the same town in rural Germany, Moselle. Joachim was called back into the military as an old man, and is the Town Commandant. Esch runs the local newspaper. A deserter, Huguenau, wanders into town and decides to buy the newspaper, curry the Commandant's favor enough to finagle money out of the town, and present himself as an upright citizen and businessman. Over the months, Huguenau accomplishes all these goals, but the Major does not like him. The Major and Esch have an uneasy and unexplainable friendship. The Major writes a column about God for the newspaper and it changes Esch's life forever. He converts to being a Protestant, and begins a Bible Study class. To Huguenau's annoyance, the Major and Esch begin taking evening walks together.

Towards the end of the war, there are rumors of prison outbreaks and unruly soldiers, so the town sets up guards around the perimeter. The townspeople hear explosions and form a mob. The prison is broken down and the prisoners are loose. Joachim is on his way to quell the riot, but is in an automobile accident. Esch and Huguenau have been assigned guard duty, but Huguenau is more worried about the printing press. He comes home, rapes Frau Esch, then follows Esch through the town and stabs him in the back with his bayonet. Huguenau then escapes back to his home in Alsace and becomes a prosperous businessman.

More summaries and resources for teaching or studying The Sleepwalkers.

The Sleepwalkers from BookRags. (c)2022 BookRags, Inc. All rights reserved.