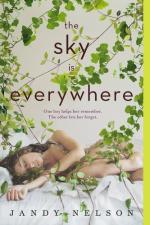 Jandy Nelson
This Study Guide consists of approximately 22 pages of chapter summaries, quotes, character analysis, themes, and more - everything you need to sharpen your knowledge of The Sky Is Everywhere.

The Sky Is Everywhere Summary & Study Guide includes comprehensive information and analysis to help you understand the book. This study guide contains the following sections:

This detailed literature summary also contains Topics for Discussion on The Sky Is Everywhere by Jandy Nelson.

The Sky is Everywhere is a novel by writer Jandy Nelson. Lennon's sister, Bailey, unexpectedly died just a few weeks ago, leaving Lennon without her better half, her best friend, and her favorite companion. Every time that Lennon thinks she has gotten past the grief, something happens to remind her of all she has lost. When Lennon returns to school, she meets a new boy, Joe, who begins showing up randomly at her house. At the same time, Lennon discovers that her sister's boyfriend, Toby, is suffering as badly as her and only sharing a few elicit kisses seems to ease the pain. Previously invisible, Lennon now finds herself juggling two boys along with a grief that is becoming overwhelming. The Sky is Everywhere is a novel of grief and of self-discovery that will leave the reader rooting for Lennon to become a racehorse with every passing page.

Lennon returns to school and is embarrassed by the attention that she receives from her classmates. The death of Lennon's sister, Bailey, a few weeks ago has left a huge hole in her life that platitudes and compassion will never fill. In band, however, Lennon is happy to meet the new boy, Joe Fontaine. Beautiful and amazingly talented, Joe has caught the attention of all the girls in band, especially Rachel, Lennon's archenemy.

After school Lennon goes home and finds Toby, Bailey's boyfriend, there. Lennon sits with him in the garden and they talk for a while. It seems to Lennon that only Toby fully understands her grief. However, Lennon is somewhat shocked at the way Toby treats her. She always felt like a third wheel around Toby. Now, though, he treats her like the best looking girl in the room.

A few days later, Joe finds Lennon where she is eating in a tree during the lunch hour and asks her to play the clarinet to his guitar. Lennon refuses and they argue. That night, Toby comes by the house in the middle of the night and Lennon finds herself accepting his kisses. Lennon is mortified, sure that Bailey would be incredibly angry with her. Lennon tells her best friend and sees the same shock and shame on her face.

When school lets out for the summer, Joe begins coming to Lennon's each morning, bearing gifts. For more than a week he comes everyday, getting to know Lennon's grandmother and Uncle Big. Lennon has no clue as to what Joe's motivations might be until the day she breaks down during a family dinner and Joe reveals his feelings for her. When they return to the house, Toby is there and he is unhappy with Lennon's obvious affection for Joe.

The next day, Joe surprises Lennon and Toby at her house, nearly catching them kissing. Later, spends the evening at Joe's where they share an expensive bottle of wine and talk about both the past and the future. They share a few amazing kisses and Lennon knows that it is Joe she wants. Lennon vows to end things with Toby. However, when Toby tells Lennon that Bailey was pregnant when she died, Lennon is overcome with emotion and kisses Toby. Unfortunately, Joe picks that moment to come to see Lennon.

Joe refuses to forgive Lennon based on the fact that his previous girlfriend cheated on him. However, Lennon cannot stop trying. Even Toby tries to explain things to Joe, but neither can get through to him. Then Lennon sees Joe with Rachel. Lennon gives it one more try, taking Joe a bouquet of her grandmother's roses that are said to have aphrodisiac properties. Joe still refuses to forgive. Finally, Lennon writes Joe a poem and leaves it in a special place in the woods. The next day, Joe finds her in this same place and forgives her.

More summaries and resources for teaching or studying The Sky Is Everywhere.

The Sky Is Everywhere from BookRags. (c)2022 BookRags, Inc. All rights reserved.