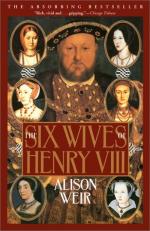 This detailed literature summary also contains Topics for Discussion and a Free Quiz on The Six Wives of Henry VIII by Alison Weir (historian).

This book chronicles the lives and relationships of the six wives of England's King Henry VIII, one of history's most well known monarchs. Rich with well-researched and meticulously documented historical detail, the book navigates the chronology of one of the most spiritually and politically volatile periods in English history while maintaining a clear focus on the personal experiences of the people living through it. Themes relating to the role of women in medieval society and the destructive power of certainty emerge as the author weaves a vivid tapestry of ambition, lust, loneliness, idealism, and the occasional glimpse of grace.

A detailed chronology of the important events in the lives of Henry VIII and his six wives is followed by an introduction by the author, in which she summarizes both the general situation of women during Henry's time and the individual ways in which Henry's six wives lived within the confines of that situation.

Part One, Katherine of Aragon, focuses on the early life of the Spanish princess Katherine, child of two great rulers who was betrothed while still an infant to Arthur, eldest child of the politically insecure king of England, Henry VII. The narrative explores the political maneuvering, typical of the age, that brought the betrothal into being, that brought Katherine to England at a very young age, that brought her to Arthur's bed as his wife, and that eventually brought her to the bed of his brother Henry as his wife after Arthur's sudden death. Part One concludes with narration of the deterioration of Henry and Katherine's marriage following the birth of their only surviving child, Mary, and his falling in love with one of Katherine's ladies-in-waiting, the ambitious Anne Boleyn.

Part Two, The "Great Matter", is titled with the name given to the circumstances that, in many ways, defined Henry's life and reign—his determination to annul his marriage to Katherine so he could marry the increasingly impatient and demanding Anne. The narrative portrays this determination as so intense that when the Roman Catholic Church refused to declare Katherine and Henry's marriage invalid (a declaration Katherine unwaveringly supported until her dying day), Henry created his own church within which he could get the marital result he wanted. The narrative goes on to describe how Anne gave birth to only one living child (the future Elizabeth I), how Henry quickly grew tired of her and found another potential wife in Jane Seymour (one of Anne's ladies-in-waiting), and how his advisors manipulated events to have Anne declared treasonous and therefore expendable. Part Two concludes with a narrative of Anne's execution, Henry's subsequent (and very hasty) marriage to Jane, Jane's almost immediate pregnancy, her giving birth to Henry's long-desired male heir, and her almost immediate death from a common fever.

Part Three, How Many Wives will he Have chronicles Henry's last three marriages—the arranged and politically advantageous union with Anne of Cleves (whose physical appearance repulsed Henry), the lust-driven union with the promiscuous Katherine Howard (whose foolish and very public adultery led her to her execution), and the contented union with the mature but reluctant Katherine Parr. The final section of the narrative includes descriptions of Henry's death, of Katherine Parr's subsequent ill-fated romance with the fickle Thomas Seymour, and of her subsequent death from the same childbirth-related fever as Jane Seymour. The book closes with a description of the contented life and graceful death of Anne of Cleves, portrayed as perhaps the wisest and certainly the luckiest of all Henry's six wives.