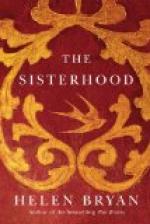 Helen Bryan
This Study Guide consists of approximately 53 pages of chapter summaries, quotes, character analysis, themes, and more - everything you need to sharpen your knowledge of The Sisterhood.

The Sisterhood Summary & Study Guide includes comprehensive information and analysis to help you understand the book. This study guide contains the following sections:

This detailed literature summary also contains Quotes and a Free Quiz on The Sisterhood by Helen Bryan.

"The Sisterhood" by Helen Bryan is an interesting novel that contains dual timelines, alternating between the female oppression of the sixteenth century and Menina's attempts to learn about her heritage in the twenty-first century. While Menina's studies lead her to Las Golondrinas Convent in Andalusia where she learns about her heritage through religious relics which originated in the convent, she simultaneously translates the Chronicle which makes up the second timeline. In the sixteenth century, the nuns of Las Golondrinas send a mission convent to settle in South America in order to escape the Church's persecution during the Inquisition. "The Sisterhood" offers an intriguing concept of the past and its relationship with the present.

In the sixteenth century narrative, Sor Beatriz prepares to send the Foundress's medal and the Chronicle with a mission group going to Spanish America to escape persecution from the Inquisition in 1552. Returning to 1504, she explains how she, Isabella, fell in love with the Muslim Alejandro Abenzucar. Their romance was discovered when they tried to run away, so he was imprisoned and died. Secretly pregnant, Isabella convinces her father to send her to Las Golondrinas since it is near the Abenzucars' home, but she gives birth to her daughter Salome and decides to take her vows. Entrusted with recording the convent's Gospel and history in the Chronicle, Sor Beatriz writes about visions of the Foundress in which they are warned to send their relics away to prevent accusations of heresy from the Inquisition. Twelve nuns, including Salome, are sent to establish a mission in Gran Canaria, but they are never heard from again. Meanwhile, Las Golondrinas shelters many endangered girls, their primary mission, including Esperanza, Luz, Sanchia, Marisol and Pia, all of whom are guilty of heresy by the Inquisition's standards. Upon learning that the Inquisition plans to visit the convent, these girls are sent to Spanish America to find Las Golondrinas de Los Andes where they believe their first mission may have settled. Esperanza records the Chronicle at this point. In Spanish America, the girls locate the convent and find that it was settled by the first mission. Marisol is kidnapped, but her captor marries her immediately. Esperanza finds Salome who married an Incan warrior and had many children. One of the children, Don Miguel, marries Esperanza. Esperanza's daughter, Isabelita, is sickly, but Pia saves her by giving her the Foundress's medal shortly before Pia dies. In 1597, Isabelita writes of her mother's death and the decision to send the Chronicle to Las Golondrinas de Los Andes where it belongs.

In 1983, a terrible hurricane strikes South America, and a three-year-old girl is found on the beach and taken to Las Golondrinas de Los Andes because she wears their medal around her neck. Soon after, the nuns relocate the Chronicle, which has been hidden for fifty years. Knowing the girl is in danger, Mother Superior allows an American couple to adopt the girl, whom they name Menina, sending the medal and Chronicle with her. Menina is an excellent child and student. In 2000, she is engaged to Theo Bonner III. However, after he rapes her, she leaves him and travels to Spain to research her thesis on Tristan Mendoza, a sixteenth century painter who intrigues her because his signature contains an image of the same swallow depicted on her medal. Due to a series of mishaps, Menina gets stranded by herself in Spain. When she seeks police assistance from Captain Alejandro Fernandez Galan, she is taken to Las Golondrinas in Andalusia for her protection. While there, Menina learns that there are six paintings by Mendoza in the convent. she explores the convent to find these paintings in hopes of finding something of value that the nuns can sell to support themselves. She also gets involved in a criminal ring abducting women to sell into sex slavery after learning of Alejandro’s assignment to shut down the ring. After the criminal enterprise is taken down, Menina’s translations of the Chronicle result in the discovery that the convent’s animosity with the Catholic Church stems from their Gospel in which Salome, their Foundress, is claimed to be the sister of Jesus, negating the necessity for the Virgin Mary. By 2013, Menina and Alejandro are married and have established a museum at the convent to honor the Gospel and Mendoza’s work. Menina is pregnant with her sixth daughter. Her six children are named Esperanza, Marisol, Luz, Pia, Sanchia and Salome in honor of their ancestors whom she promises to teach them about once they are older.

More summaries and resources for teaching or studying The Sisterhood.

The Sisterhood from BookRags. (c)2022 BookRags, Inc. All rights reserved.