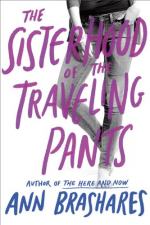 The Sisterhood of the Traveling Pants Summary & Study Guide

Ann Brashares
This Study Guide consists of approximately 60 pages of chapter summaries, quotes, character analysis, themes, and more - everything you need to sharpen your knowledge of The Sisterhood of the Traveling Pants.

The Sisterhood of the Traveling Pants Summary & Study Guide Description

The Sisterhood of the Traveling Pants Summary & Study Guide includes comprehensive information and analysis to help you understand the book. This study guide contains the following sections:

This detailed literature summary also contains Quotes and a Free Quiz on The Sisterhood of the Traveling Pants by Ann Brashares.

The story, Sisterhood of the Traveling Pants, by Ann Brashares, opens up with Carmen, a young teenaged girl, buying a pair of jeans from a thrift store. The pants not only fit Carmen, but her best friends, Lena, Bridget, and Tibby, who are shopping with her. They all remark that this seems odd since none of them have the same body type at all. The jeans are the least of their worries at this moment. They are upset because they are not going to get to spend the summer together as they have for the past fifteen years.

Carmen is going to be going to South Carolina to visit her father for the entire summer, while Lena is going to go to Greece with her sister to visit their grandparents. Bridget is going to go to a soccer camp in California, and then in Mexico, while Tibby will stay behind in Maryland where she has a summer job lined up. After their shopping they stop to talk about their summer plans and how they will stay in touch. They go to Gilda’s Gym, where their mothers had met one another before any of the girls were even born and have a friendship ceremony. They decide that they will take the pants that seem to fit all of them so well, and each will send the pants to one another throughout the summer. This way they can stay in touch, remember one another, and have a little piece of home with them. They part ways and their summers begin.

Tibby, who stayed behind to work at a summer job at Wallman’s hates her job after only a week of it. As a result, she decides that she will document the complete agony of the ordeal in a ‘suckumentary’ about it that she will show her friends in devastating technicolor. Carmen reaches South Carolina with hopeful expectations, only to learn when she’s picked up at the airport that her father has gotten engaged and his new fiancé has two teen stepchildren, who are now going to be part of her summer. Their names are Paul and Krista, and are very Anglo Saxon, whereas Carmen is part Puerto Rican and feels very out of place all of a sudden. Lena isn’t faring any better as her grandmother immediately tries to set her up with a boy that lives in the neighborhood, named Kostos. Lena wants nothing to do with him and doesn’t trust him at all. Bridget finds that she has a crush that is developing with her soccer coach, Eric.

Tibby shares about an incident that happened at Wallman’s while she was working there her first week. A young girl, whom she would later find out was named, Bailey, collapsed on the floor in the store. Reacting quickly, Tibby ended up going with her to the hospital where she found out that the girl had leukemia. In order to keep her mind off of things in the ambulance and in the hospital, Tibby had told Bailey, who was twelve, about her ‘suckumentary’. Tibby agreed to let Bailey, when she was well, help her make the film. Now, she writes, she is regretting that offer.

Carmen hates South Carolina, and she hates her new family even more. As a result she’s rude and sullen. She is tired of hearing about the wedding plans, Lydia’s ex-husband, and watching her father act goofy. Bridget, in California, tries to turn up the charm a notch or two whenever Eric, her coach is around. She finally convinces some of her teammates to go with her to a bar in town, and while she’s there she sees Eric and is able to dance with him. However, the next day when she is on the field, she is too aggressive with the ball and Eric yells at her, upsetting her.

Lena passes the time in Greece by working on her painting, spending time with her grandparents, and taking long walks through the beautiful countryside. One of her favorite spots takes her near a beautiful blue pool of water, isolated from the main traffic. One day she decides to go for a swim, naked, and while she’s there, she looks up to see Kostos looming over her. She screams, gets out, grabs her clothes and hastily puts them on, then runs home. When she enters the house so disheveled her grandfather thinks that Kostos has tried to force himself on her and goes ballistic. He goes over to Kostos’s grandfather’s house and punches him. No one talks to anyone after that, and Lena finds that now she misses speaking with Kostos.

Meanwhile, Tibby and Bailey begin work on the film. Their first interviewee is named Brian McBrian. Tibby didn’t think he would make a very interesting film subject, but he was a very animated speaker and she is pleasantly surprised. Next, they go to visit a woman named Maragert, who’d worked for decades at the local theater. At first, Tibby thinks that she will be able to use Margaret’s interview as a way to include a humorous element into the work, but after the interview, she realizes that the woman is actually very lonely, and it makes Tibby feel bad.

Carmen goes to try on bridesmaid’s dresses with Lydia and Krista. None of them fit her, but all of them look great on Krista. Finally, upset beyond belief, Carmen insults Lydia and storms out of the dress shop. She expects that her father will give her a lecture, or that Lydia will at least yell at her when everyone gathers back at the house. But, instead, everyone acts as if nothing even happened. This ticks Carmen off even more and she runs out of the house, wishing she were home in Maryland. She half hopes that her father will come after her and then they will have their good talks like they used to. He doesn’t. When she comes home she sees that they’ve already started supper without her. Angered again, she picks up a huge rock and hurls it through the kitchen window at them. Then, without a backwards glance she gets on a bus and starts her way back to Maryland.

Bridget decides to take things to a new level with Eric and sneaks into his cabin. She slides into bed next to him. Still groggy, Eric doesn’t realize at first what is going on, but once he does he tells her to get out. Still, Bridget thinks that because he didn’t report her that he must have liked having her near him. She isn’t wrong, and in a few days she has had sex with him. She’s ill for a few days afterwards and then on the day of the soccer match she screams at the head coach, then leaves before the game is over. Eric comes to look for her, to talk to her about what happened between them, but Bridget doesn’t want to talk.

Carmen, now back at home in Maryland, feels guilty about what she did. She sends some money to her father so that he can fix the window. She calls him and tells him why she was angry and how she feels that he is replacing her and her mother with a new family. He invites her to the wedding anyway, and at first she tells him that she will not come. However, the day before the wedding she gets on a plane and attends the wedding. Afterward, they agree to always say what is on their minds and to honest with one another in the future.

Lena is frustrated and that is causing her to be unable to focus on her painting. Kostos has been ignoring her and she finds herself shocked that it upsets her so much. She decides to take a walk and when she passes by her ‘secret’ pool, she sees Kostos skinny dipping. It is then that she realizes that he hadn’t been spying on her before when she was there, but that this had been his secret swimming spot, too. She goes home and is able to paint again. Later, her grandmother tells her that Kostos’s family were killed many years ago in a car accident and that he lives with his grandparents as they are all that he has. Lena paints a picture of Kostos.

Tibby becomes worried when Bailey doesn’t meet her at Wallman’s to do another interview. It isn’t like her not to show up, so Tibby calls her house and finds out that Bailey has had to go to the hospital. She goes to the hospital but can’t see Bailey. Bailey’s mother tells her that Bailey has come down with an infection that she might not recover from. Tibby goes home to find that her guinea pig, Mimi, has died. Upset, and not able to deal with so much life and death in one day, she puts the guinea pig’s body in the freezer. The phone rings and she can see that it is from Bailey’s mother. She just doesn’t want to speak with her and ignores her. Carmen is over one day and overhears the voice message from Bailey’s mother. She tells Tibby that she should go to the hospital. Feeling guilty, Tibby goes and finds out that Bailey is not going to make it. Two days later Baildy dies. Tibby goes to the funeral, and then, when she returns home, she takes Mimi out of the freezer and buries her near the spot where Bailey was buried.

Lena’s sister, Effie, happens across the painting of Kostos and urges Lena to tell Kostos how she feels. Effie reminds her that they are about to leave to go back to Maryland. Lena decides to give Kostos some of her paintings and goes to find him. She gives him the paintings, then tells him how she feels. He kisses her and they share the remaining days in Greece together. Lena learns that Bridget is not doing well in Mexico, and so she reroutes her airline ticket and goes to Mexico to help Bridget pack to get home.

The summer is over and the girls are all back in Bethesda, Maryland where they have gathered to have a birthday party at Gilda’s Gym. Each of them agree to write journal entries of their time wearing the pants and their adventures. They each begin sharing their summer with each other and they watch Tibby’s film.

More summaries and resources for teaching or studying The Sisterhood of the Traveling Pants.

The Sisterhood of the Traveling Pants from BookRags. (c)2022 BookRags, Inc. All rights reserved.