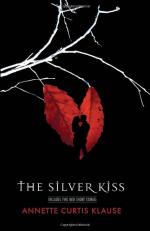 Annette Curtis Klause
This Study Guide consists of approximately 48 pages of chapter summaries, quotes, character analysis, themes, and more - everything you need to sharpen your knowledge of The Silver Kiss.

The Silver Kiss, by Annette Curtis is a dark fantasy story set in a semi-fictional version of Seattle and examines the theme of death, loss, and belonging through the romance of a young girl (Zoe Sutcliff) and a three-hundred-year-old vampire boy (Simon). Through the course of the book we discover that the Sutcliff family are undergoing a quiet tragedy as Zoe's mother is currently in hospital dying from terminal cancer. It is through Zoe's burgeoning relationship with the vampire youth, and their battle with a second and thoroughly evil vampire named Christopher that Zoe and Simon struggle to come to terms with their own mortality and the loss of the loved ones in their lives.

Zoe Sutcliff is presented at the start of the book as a mature, capable girl who is forced to witness the slow loss of her mother, Anne Sutcliff and the dislocation of her father, Harry Sutcliff. She turns to her only true friend Lorraine. However it quickly becomes apparent that Lorraine does not, and cannot provide the emotional support that Zoe needs as Lorraine herself is ordered to move to Oregon with her father and her stepmother as her father has found a new job there, leaving Zoe completely alone with her grief.

Simon the vampire is entranced by this young girl who is so grief-stricken, and has to come to terms with his own awakening feelings of fondness and indeed love, whilst he tries to control his own horrific nature. His growing attachment to the mortal girl plunges them both into danger as he also seeks to finally put an end to the twisted vampiric child Christopher; his own brother who is a sadistic, vile and beastly version of what Simon could become. Despite his better judgement, Simon approaches the mortal girl and the two are forced to confront Christopher in a climatic battle at the end of the book.

The Silver Kiss takes the readers and its characters on a dark journey set in the midst of teenage life, and in this sense is a coming of age drama which leads the characters to confront their own fears of death, and even challenge what their notions of death actually is. Through the medium of a horror story, the Author uses the novella to examine different types of 'horror' such as personal horror in the form of the terminal illness, spiritual horror in the form of Christopher and Simon, the vampires, and what constitutes real loss.

More summaries and resources for teaching or studying The Silver Kiss.