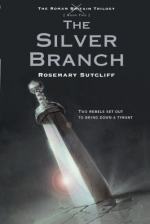 Plot Summary
+Chapters Summary and Analysis
I The Saxon Shore, II A Whisper Down the Wind, III The House on the Cliffs
IV The Sea Wolf, V Nightshade!, VI Evicatos of the Spear
VII To the Fates, That They May Be Kind, VIII The Feast of Samhain, IX The Sign of the Dolphin
X The Berenice Sails for Gaul, XI The Shadow, XII A Sprig of Broom
XIII The Silver Branch, XIV An Ancient Ensign, XV Return to the Legions
XVI "Carausius! Carausius!", XVII Eagle in the Flames, XVIII Triumphal Garlands
Free Quiz
Characters
Symbols and Symbolism
Settings
Themes and Motifs
Styles
Quotes
Order our The Silver Branch Study Guide

Rosemary Sutcliff
This Study Guide consists of approximately 36 pages of chapter summaries, quotes, character analysis, themes, and more - everything you need to sharpen your knowledge of The Silver Branch.

This detailed literature summary also contains Quotes and a Free Quiz on The Silver Branch by Rosemary Sutcliff.

The Silver Branch is the story of two cousins, Justin and Flavius, who are part of the Roman army in Britain in the third century. Justin is a surgeon and Flavius is trained as a soldier and they serve under Carasusius, the emperor of Britain and Gaul. Carasusius had rebelled against the Roman ruler Maximian who ultimately approves of Carasusius' role in Britain. Justin meets Flavius when appointed to the same military unit and they quickly discover that they are cousins. When the cousins accidentally learn of a plot to murder Carasusius by his finance minister, Allectus, they try to warn him but the emperor assigns them to duty on the Northern wall.

More summaries and resources for teaching or studying The Silver Branch.